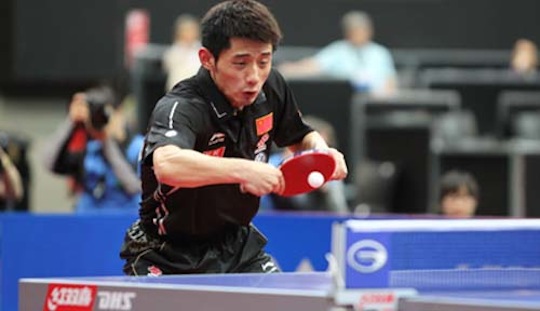 World Champion, He replaces Chinese national team compatriot, MA Long, in the top spot on the Men’s World Rankings issued by the International Table Tennis Federation on Friday 1st June 2012. MA Long is now at no.2, having occupied the top spot since October 2011. It is the first time in his career that ZHANG Jike has risen to the top of the list.

Also enjoying a new career high World ranking is XU Xin; he is now at no.3.

The change follows results on the GAC GROUP 2012 ITTF World Tour in May, where XU Xin reached the Men’s Singles final in both Korea and China. In the former he lost to ZHANG Jike in the final, in the latter he beat MA Long in the gold medal contest.

Progress for ZHANG Jike and XU Xin but, in addition to MA Long, it means a fall of one place for their colleague, WANG Hao, he drops on spot to fourth place. MA Lin retains fifth spot; thus the leading five players on the newly published list are, as one month before, all from China.

Meanwhile, despite defeat in the final of the Women’s Singles event on the GAC GROUP 2012 ITTF World Tour in Korea by LIU Shiwen and then one week later by LI Xiaoxia in the penultimate round in China; DING Ning retains her top spot on the Women’s World Rankings.

LIU Shiwen, the victor over DING Ning in the final in Korea but beaten in the gold medal contest one week later in China by LI Xiaoxia, remains at no.2. However, as a direct result of her success, LI Xiaoxia climbs one place to no.3, changing positions with colleague GUO Yan.

The player to benefit is Japan’s Kasumi ISHIKAWA; she climbs one place to no.5 and thus enjoys the highest ever World ranking of her career.