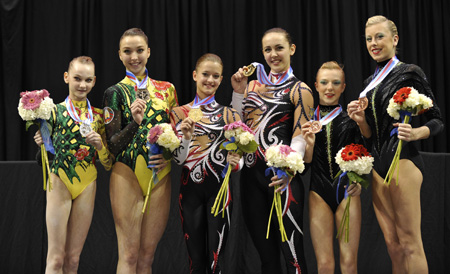 The now two-time World gold medallists didn’t flinch during their combined routine, giving a dramatic, masterful performance that received 28.259 points, including the highest scores from the artistic and execution judging panels of any pair.

Belarus’s Yana Yanusik and Sviatlana Mikhnevich, who qualified to the final in second place, presented a routine that displayed Mikhnevich‘s amazing flexibility to energetic tango music to retain their silver medal standing with 27.853 points.

Though Russia’s Valentina Kim and Elizaveta Dubrovina performed last in the final and showed the highest amount of difficulty of any pair, they were unable to dislodge Britain’s Poppy Spalding and Alanna Baker, who took bronze with 27.800 points for a strong routine that featured several difficult throws.

In their second World Acro Championships, the U.S.’s Nicole Barrilleaux and Beth Landeche earned fifth place with 26.956 points. Poland’s Aleksandra Bialas and Katarzyna Chlebisz, the first pair to perform in the final, were sixth with 26.330 points.