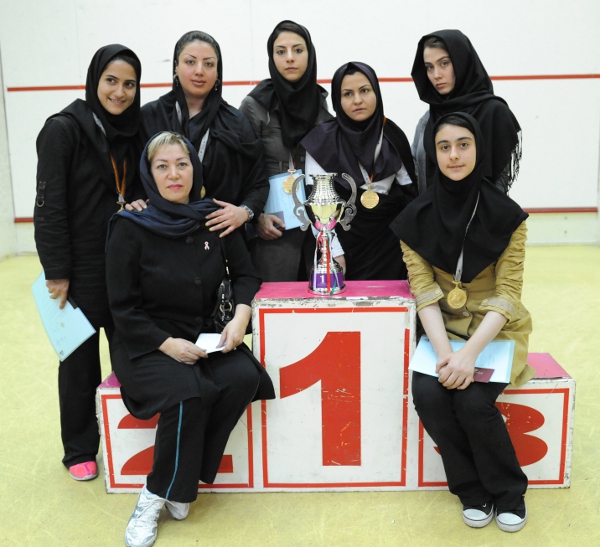 London, May 21, 2013: With the squash court count doubling over the past three years and the number of registered players rising five-fold, the Iran Squash Federation is reporting record growth for the sport in Iran – particularly amongst women and girls.

At the elite level, Iran has made a huge progress over recent years in the region. From outside the top 16, the Iran team finished in seventh place in the Asian Junior Championships two months ago in Korea.

Furthermore, Iranian girls will participate for the first time in the forthcoming Asian Youth Olympic Games in Nanjing.

“Establishing the squash association with civic authorities and the Education Ministry has speeded up the growth of the sport dramatically,” said ISF President Masoud Soleimani. “Today many parks in the capital city Tehran have one-wall squash. Also in schools, one-wall squash is popular, and some classrooms have been modified so squash can be taught.”

Some 400 women coaches have been trained to promote squash amongst young children in kindergartens. To this end, light plastic rackets have been specially designed and produced. The balls are also lighter and bigger – especially designed for the kids – named ‘smile balls’.

Iran Squash Federation budgets are equally divided between initiatives for men and women. As a result of this, women’s squash has become very successful over the past three years.

“Sogol Samoodi, our U17 girl who was placed sixth in Asia in 2011, is the first lady to achieve this from Iran,” explained Soleimani. “Ailee Nayeri, our U13 champion, also reached the Asia top 10.

“Also, for the first time in the history of the game here, Iran had six boys and six girls in the top eight players of different age categories in 19th Asian Junior Individual Championship in Kish Island, Iran,” added the ISF President. “This was the first major championship hosted in Iran, in which Iran was very successful and responded very positively to the trust of Asian Squash Federation.

“This success led Iran to become the host of this championship again in 2014 – another huge achievement for the country at international levels.” Picture shows Iran Women’s Premier League champions Tehran. —- WSF