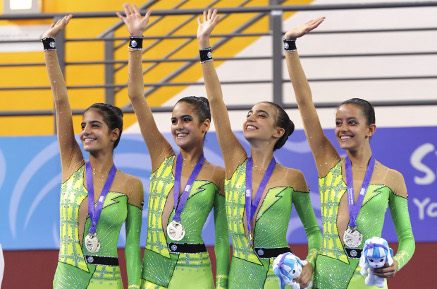 LAUSANNE (SUI), March 19, 2012: Women Sport, The Egyptian Rhythmic Gymnastics Group has been awarded the Women and Sport Achievement Diploma by the International Olympic Committee (IOC) in recognition of its outstanding contribution to promoting the development and participation of women and girls in sport.

Following the initiative of the Egyptian Gymnastics Federation, the FIG forwarded the Group’s candidature for the IOC’s 2012 Women and Sports Award for Africa, which resulted in its nomination. The Selection Committee decided to present the main award to Ms Penninnah Aligawesa Kabenge of Uganda, honoured at the Awards Ceremony in Los Angeles (USA) on February 16, 2012 for this category.

The Egyptian Rhythmic Gymnastics Group won Silver at the 1st Youth Olympic Games in Singapore in 2010, a first in the country’s annals. It was a groundbreaking Olympic medal for Egyptian women and the first Olympic medal in Gymnastics for Egypt and Africa.

IOC Women and Sport trophies are awarded annually to promote the advancement of women in sport. They recognise outstanding achievement and contributions made to develop, encourage, and strengthen the participation of women and girls at all levels in the sports world. Six trophies are awarded each year including one at world level and one each for Africa, Americas, Asia, Europe and Oceania.