Imaad also won a free return ticket to participate in the WYC which will be played at Dubai on December 13-15. 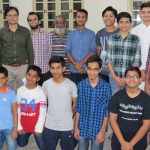 About 80 players took part in the qualifying tournament.

The players were divided into two divisions

In the division ‘A’ Syed Imaad won 13 of the 18 matches and maintained a spread of 1379 to take the first position.

Ali Rashid Khan also won 13 matches but stood 2nd with a spread of 365.

The top ten WESPA Youth Scrabble players who got selected from division A are:

The players that qualified for the WESPA Youth Scrabble team from division B are:

The WESPA Youth cup is the premier youth event and one of the four major youth scrabble events in the world.

Pakistan is attempting to become the only country in history to win all the four major youth scrabble events. —- Pakistan Scrabble Association