Home  »  OTHER SPORTS   »   The weekly newsletter of the International Tennis Federation 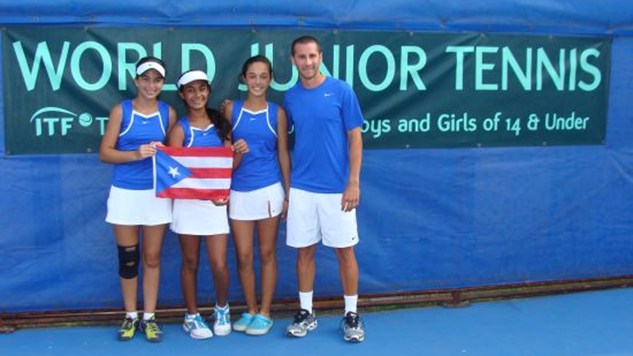 London, March 19, 2012: weekly newsletter, Home favourite Thiago Monteiro and Kyle McPhillips of the USA top the seedings at the Grade A Copa Gerdau in Porto Alegre, Brazil. The tournament, which takes place at the Associacao Leopoldina Juvenil from 19-25 March, is the third Grade A event of the 2012 ITF Junior Circuit, forming the climax to the series of ITF events in Latin America.

As well as being the top seed, Monteiro is also the defending champion and will be looking to bounce back from a first round defeat at last week’s Banana Bowl, the Grade 1 warm-up event also held in Brazil. The Brazilian will face stiff competition from the second seeded Kaichi Uchida from Japan and third seed Gianluigi Quinzi from Italy. Both players are rising stars of the ITF Junior Circuit and have distinguished themselves in ITF Junior team competitions playing for their country. Uchida led Japan to victory in the 2010 Junior Davis Cup by BNP Paribas and Quinzi was a member of the Italian side who finished runners-up in the same competition in 2011. Other challengers include Mackenzie Macdonald (USA) who made it to the semifinals of this year’s Australian Open juniors and Mateo Nicolas Martinez (ARG) who has been in good form in the ITF Junior events in South America in the lead up to this event.

Top seed McPhillips has been posting strong performances on the ITF Junior Circuit, including reaching the semifinals of the Grade A Abierto Juvenil Mexicano in January and winning the Grade 2 Copa Milo in February. One of McPhillips’s main rivals is Montserrat Gonzalez from Paraguay, who was a quarterfinalist at last year’s Junior Wimbledon and is an established member of the Paraguayan Fed Cup team. She is looking to win her first-ever Grade A event in Porto Alegre. Other players who will be looking to progress into the latter stages in Porto Alegre are third seed Zuzanna Maciejewska from Poland who will be looking to win her second Grade A title after winning last year’s Osaka Mayor’s Cup in Japan. Sachia Vickery from the USA is another threat, having already won a Grade 1 title in 2012 after securing the title at Copa de Café in Costa Rica in January. For more information visit www.itftennis.com/juniors.

Oh and Cao on form in Manila:

Chan Yeong Oh (KOR) and Si-Qi Cao (CHN) dominated the boys’ and girls’ events respectively at the ITF 14 and under Development Championships at the Rizal Tennis Center in Manila on 5-16 March. The two players won both the tournaments they contested, while China, P.R. claimed the inaugural challenge trophy ahead of Korea, Republic.

It was the first time the Philippines Lawn Tennis Association (PHILTA) had organised an ITF 14 and under Division 1 Development Championships. The competition attracted the best 14 and under Asian juniors with players from Turkmenistan, Uzbekistan and Kazakhstan making up the ITF Division 2 team, while the Central Asian Team was comprised of juniors from Malaysia, Singapore and Vietnam.

Ajay Pathak, Vice President of PHILTA, said: “This is just the first step and the start of bigger and better things for Philippines tennis. I feel this championship has generated excitement and motivated more young children to take up the game more seriously. PHILTA now looks forward to forging a stronger relationship with the ITF by organising more ITF development events as well as entry level professional events.” Complete results are available on www.itftennis.com/development.

The two 14-and-under teams advance to the North/Central America and Caribbean final qualifying event, which will be held in Merida, Mexico, on 26-28 April. They will compete against teams from Canada, Mexico and USA for the chance to qualify for the World Junior Tennis Finals to be held in Prostejov, Czech Republic in August.

Action continues this week in Dominican Republic with the North/Central America and Caribbean pre-qualifying Junior Davis Cup and Junior Fed Cup by BNP Paribas events. Sixteen boys’ teams and 15 girls’ teams are competing for a chance to play at the final qualifying event in Mexico in April. For more information visit www.itftennis.com/juniors.

The quad and junior events for the BNP Paribas World Team Cup will again be contested by eight nations. Host nation Korea, Republic will field a team for the first time and join Japan as the two wild cards alongside the six direct entries. Russia enter the junior event, supported by the Johan Cruyff Foundation, for the first time and join Argentina, South Africa and former champions USA among the wild cards. For more information visit www.itftennis.com/wheelchair.

Mendoza in Argentina hosted the first-ever Green Badge Level 1 School in Spanish for Chair Umpires earlier this month. The school was taught by Carlos Ramos (ITF Grand Slam Official) and Ricardo Reis (ITF Officiating Regional Officer for South America). Level 1 schools are taught and examined in French or Spanish. It is anticipated that these courses will be a major boost for officiating in the region. The following 16 officials gained their new ITF certification in Mendoza: