Lausanne, July 13, 2017: The World Baseball Softball Confederation (WBSC) today unveiled its brand new slogan — Game Time! — at a launch event at the Olympic Museum in Lausanne, Switzerland, with WBSC President Riccardo Fraccari also revealing the world governing body “already has a vision for 2024, 2028 and beyond,” with respect to earning baseball and softball a long-term place at the Olympic Games (WBSC GAME TIME slogan). 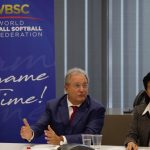 In preparation for baseball and softball’s return to the Olympic Programme at Tokyo 2020, the WBSC launched its dynamic new brand to senior Olympic Family guests, and revealed its ambitious new vision as an organisation: to build a billion-strong baseball and softball community by 2024.

The current estimated worldwide community of baseball/softball athletes and fans is approximately 200 million.

Speaking at the launch, President Fraccari said: “I would like to thank all of our friends from around the Olympic Movement who attended the launch and showed support for our exciting vision for the future.

We are honoured to be a part of this Olympic Family.

“The WBSC is incredibly excited to return to the Olympic Games at Tokyo 2020, where baseball-softball will feature for the first time since 2008.

But the WBSC already has our sights set on 2024, 2028 and beyond. We have created a new brand to help us demonstrate our disciplines’ long-term value to the Olympic Games and the Olympic Movement.

We are growing our sport by making it a more appealing, more accessible team sport experience, and more dynamic than ever. Now is the time to turn our potential into success. Now, it’s Game Time!”

WBSC Secretary General Beng Choo Low said: “Since the IOC Session in Rio we have had a greater focus than ever on youth development — on creating the next Olympians. We believe our disciplines are among the most accessible and inclusive team sports on the planet.

We are approaching Tokyo 2020 with great humility, but we are also optimistic we will make a huge contribution to a wonderful Games, with full stadiums, passionate fans and quality competition guaranteed.” —- WBSC