Changwon (KOR), April 27, 2018: In the one and only final scheduled for today at the ISSF World Cup Stage 2 in Changwon, the People’s Republic of China pocketed its fourth gold medal of the competition with 18-year-old shooter Wang Zeru, who ruled the women’s 50m Rifle 3 Positions event. 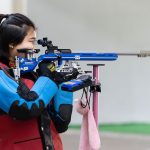 Making her first appearance in an ISSF World Cup, Wang took the lead at the end of the second standing series, overtaking Austria’s Franziska Peer and landing on top of the podium at the end of a thrilling duel with her more experienced rival.

As she held a 1.9-point advantage with two shots left to fire, in fact, the young Chinese shooter nailed a bad 8.4, allowing Peer to erase the gap and tie the score with a good 10.3.

In their 45th and final shot, both shooters fired outside of the 10th ring, and Wang’s 9.9 was just good enough to best her rival’s 9.8.

The 18-year-old Chinese talent then finished with 458.3 points, adding the World Cup gold to the Air Rifle bronze she won at last month’s Junior World Cup in Sydney (AUS).

Instead, 30-year-old Peer — who was atop the table at the end of both the kneeling and prone positions — finished with 458.2 points, doubling the World Cup silver she won in Baku (AZE) in 2016.

The bronze medal was awarded to Slovenia’s two-time Olympian Ziva Dvorsak — bearer of the highest qualification score with 178 points — who took 3rd place with 445.4 points.

The two shooters eliminated at the 40th-shot mark were Germany’s 23-year-old Jolyn Beer and Republic of Korea’s 24-year-old Lee Eunseo: Beer — who currently leads the World Ranking in this event — placed 7th with 403.8 points, while Lee concluded in 8th position, scoring 398.7 points in her first final participation.

One shot later they were followed by Ukraine’s Anna Ilina, also a first-time finalist, who placed 6th with 414.4 points, and by Japan’s 27-year-old Shimizu Ayano, who concluded 5th with 424.6.

Furthermore, both of them nailed the best World Cup placement of their career: Ilina, indeed, pulverized the 51st place she obtained in Gabala (AZE) in 2015, while Shimizu slightly improved the 6th position she took last year in New Delhi (IND).

A second Chinese finalist — Rio 2016 silver medalist Zhang Binbin (29) — finished in 4th place, slipping out of the podium with a disappointing 8.7 in her 43rd shot and signing off with 434.9 points.