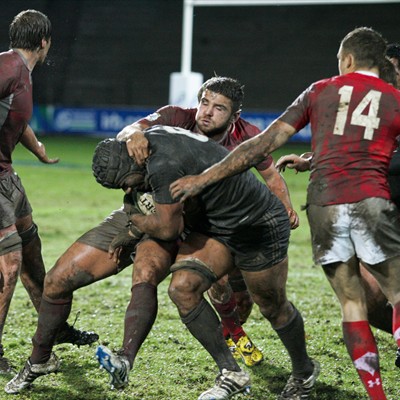 (IRB News) South Africa, June 9, 2012: Wales recorded the shock of the IRB Junior World Championship 2012 so far by inflicting a first ever championship defeat on reigning champions New Zealand to move within touching distance of the semi-finals.

On another extraordinary day of upsets at the premier age grade tournament, Wales edged out New Zealand 9-6 and Argentina continued their excellent start with a 15-3 victory over Australia at the Danie Craven Stadium in Stellenbosch in what is shaping up to be the most competitive Championship to date.

In the last match of the day in Stellenbosch, 2011 finalists England overturned a half-time 15-3 deficit to beat Ireland 20-15 and round off an intriguing day set against the backdrop of driving rain and an extremely heavy pitch.

Only Argentina, Wales and England now remain undefeated, setting up a compelling final day of pool play on Tuesday, June 12.

The strong crowds who braved the conditions at both venues were treated to some exceptionally competitive Rugby as once again the cream of the world’s Under 20 players showed why they are the future stars of the sport.

IRB Junior World Championship Tournament Director Philippe Bourdarias said: “The 2012 championship is shaping up to be the most competitive to date. The conditions today proved to be a real test, but it was fascinating to see how the teams dealt with them, and there were some interesting results which leave the tournament wide open.”

Pool A: Wales down New Zealand as Fiji topple Samoa

Wales pulled off the biggest shock of the Championship with a physical display against four-time winners New Zealand, the steady nerves and boot of Tom Prydie meaning they only to avoid defeat to reach the semi finals for the first time since 2008.

Earlier in the day, at the University of Western Cape Stadium (UWC), Fiji backed up the promise shown against Wales in the opening round with a hard-fought 15-3 win over Pacific Island neighbours Samoa.

Pool B: South Africa off the mark as England win again

South Africa bounced back from their shock loss to Ireland to record their first victory of the tournament after seeing off Italy 52-3 at UWC, much to the delight of an impressive crowd braving the driving rain.

England’s push for a second consecutive IRB Junior World Championship final continued after they came from behind to defeat Ireland 20-15 on the final match at the Danie Craven Stadium.

Argentina, fresh from their opening round victory over France, proved their feat was no flash in the pan with a controlled and physical performance against Australia at the Danie Craven Stadium in Stellenbosch that will have raised a few eyebrows amongst their rivals.

France and Scotland played out what was arguably the match of the day at UWC with the French bouncing back from the opening day disappointment against Argentina to see off a spirited Scotland side 30-29 thanks to a late try by Sebastien Taofifenua.

With pitch conditions deteriorating at the Danie Craven Stadium owing to heavy rain over the past 48 hours, the matches scheduled to be played at the venue will be moved to Newlands and the Cape Town Stadium respectively.