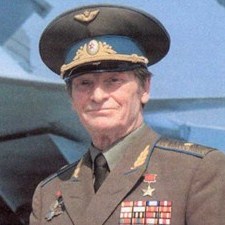 Dublin – Ireland, Feb 28, 2013: In acknowledgement of the great heights he reached in a lifetime devoted to Rugby and aviation, the International Rugby Board has inducted the late Vladimir Ilyushin into its Hall of Fame.

IRB Chairman Bernard Lapasset made the presentation of a Hall of Fame pin and badge to family friend Vadim Petrenchuk as part of the Rugby World Cup Sevens 2013 Pool Allocation Draw at Petroff Palace in Moscow on Thursday.

Considering that his parents, two uncles and elder sister were all highly-skilled aircraft designers it was always Ilyushin junior’s destiny to take to the skies.

The Muscovite fulfilled his ambition to become a test pilot of leading-edge, fast aircraft in an illustrious career that won him the highest state prizes and military promotions several years ahead of the norm.

His love of aviation saw him pilot more than 6,000 flights in 145 different types and modification of aircraft between 1943 and 1981, the year he retired as Lieutenant General of the Russian Air Force.

Claims that he was also the first man into space – a few days before the feat was achieved by national hero Yuri Gagarin in 1961 – have yet to be fully substantiated. But his contribution to both the aviation industry and Rugby in Russia is beyond any doubt.

It was during the 1940s, while a student at the Moscow Aviation Institute (MAI), that Ilyushin first came into contact with Rugby. His love of the sport was immediate and stayed with him for the rest of his life.

Ilyushin marked his 40th birthday on March 31, 1967 by forming the Soviet Rugby Federation, which was heralded as a watershed moment for Rugby in Russia because it meant that crucially it had access to state support, while also becoming part of the formal ‘Soviet Sport Classification’.

Ilyushin was named as the Federation’s first President and continued to be a central figure in the development of Rugby in both the Soviet Union and then Russia in the post-communist era.

Having played an instrumental role in getting the Soviet Union team integrated in the playing structure of FIRA in 1975, he turned his attention to domestic matters and the following year played a supportive role in the formation of a nationwide Rugby competition.

VVA, or the ‘Pilots’ as they are known, have continued to be the dominant force in Russian club Rugby, winning all there is to win as well as supplying half of their country’s Rugby World Cup squad in New Zealand, a tournament that came just too late for Ilyushin.

However the former Major did experience life Down Under 11 years earlier as team manager on the Soviet Union Rugby team’s tour to Australia in 1990, and the side enjoyed a stunning 22-21 victory over Queensland Country in Townsville in the opening game of their six-match schedule.

Following the dissolution of the Soviet Union in February 1991 Ilyushin continued to be a prominent decision-maker in Rugby in his role as Honorary President of the Russian Rugby Federation.

Lapasset said: “I am delighted to be inducting Vladimir Ilyushin, a true pioneer of Rugby in Russia, into the IRB Hall of Fame.”

“He was intrumental in the growth of the sport in Russia and in establishing the Soviet Rugby Federation and the first domestic league. Indeed Ilyushin’s vision and dedication is being realised today in the form of Russia’s rise to prominence on the international stage with Moscow set to host an exceptional Rugby World Cup Sevens 2013 and the men’s and women’s Fifteens and Sevens teams continuing to impress at the world’s biggest competitions.”

In November 2007 he was awarded the civilian Order of Alexander Nevsky – in addition to his many military medals – in recognition of his overall contribution to sport in Russia.

Fittingly, Russia secured qualification for their first-ever Rugby World Cup during his lifetime, albeit by a matter of days. He passed away on March 2 2010, two days after they had booked their place at RWC 2011 in New Zealand.

Chaired by IRB Chairman Bernard Lapasset, the IRB Hall of Fame honours Rugby greats who have enhanced the Game through their exceptional achievements. Players, entire teams, administrators, coaches, referees, members of the media and Rugby personalities are considered based on their outstanding contributions.

Each year, the IRB Hall of Fame recognises the achievements of individuals and organisations that have made outstanding contributions to the development of the Game worldwide. The theme of this year’s induction is “Rugby – a global Game” and celebrates Rugby’s expansion to become a global sport played by millions of men and women worldwide.