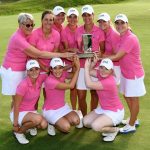 It is the sixth consecutive victory for the Continent of Europe and capped a very strong second day performance in the foursomes and singles.

Starting the day level at 6-6, the Continent of Europe won all four of the morning foursomes matches to establish a commanding 10-6 lead going into this afternoon’s singles.

Facing an uphill challenge, GB&I needed to get off to a good start in the afternoon singles and they secured the first point. Sophie Lamb, the 2016 Ladies’ British Open Amateur Stroke Play Champion, defeated Linnea Strom 3&2 to reduce the deficit to three points.

The Continent of Europe maintained a grip on the match, however, when Virginia Elena Carta defeated Leona Maguire, number one in the World Amateur Golf RankingTM, by one hole. That left the Continent of Europe requiring just one point to retain the trophy they won at Malone Golf Club in 2015.

Despite Olivia Mehaffey giving GB&I their eighth point, after her one hole victory over Matilda Castren, confirmation that the trophy was staying with the Continent of Europe quickly followed when 2016 Ladies’ British Open Amateur Champion Julia Engstrom defeated Alice Hewson by one hole.

The Continent of Europe secured outright victory when Puk Lyng Thomsen completed a 3&2 victory over the youngest member of the GB&I team, Annabel Wilson.

India Clyburn recorded the final point for GB&I with a one hole win against Morgane Metraux but defeats for Maria Dunne (2&1 by Dewi Weber) and Gemma Clews (by two holes to Albane Valenzuela) enabled the Continent of Europe to claim a 15-9 victory.

Key Quotes
Anna Roscio (Continent of Europe Captain)
“We played very well, probably better on the second day than on the first. Winning the foursomes 4-0 today was a terrific boost. I knew we would not be beaten after that.

“But, to be fair, this was a very good GB&I team who deserved to finish closer than six points behind us.

“I never played in a winning Continent of Europe in the Vagliano Trophy so this is a great feeling for me to make it as the captain.”

“We are all disappointed in the GB&I camp because we know we have the potential to play better than that. We peaked too early on the first day and for some reason we were not firing on all cylinders on the second day. We just could not get up any momentum.

“I have to say the golf overall was of a very high standard, higher than I can remember in the winning Vagliano Trophy teams in which I played.

“There were a lot of birdies and we had our fair share of them but not enough of them to turn the tide our way on the final day.”

“It really is tougher to beat the Continent of Europe in the Vagliano Trophy than it is to beat the Americans in the Curtis Cup, as we did at Dun Laoghaire last year.

“The Continent of Europe had strength in depth and had all their top players on song.”

“I’m very disappointed that we were well beaten by the Europeans but, at the same time, I am very proud of the way our girls fought to the finish.

“It’s a great experience for Under-16s to play at this level and they will be all the better for it.” —- Photo: The R&A