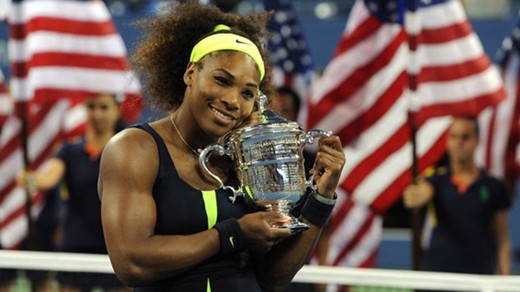 Serena Williams reclaimed her US Open crown on Sunday night with a 62 26 75 victory over world No. 1 Victoria Azarenka. It is the American’s fourth US Open title and her 15th Grand Slam victory. Serena started the match in typical powerful fashion and Azarenka looked unable to cope as the American broke serve twice to take the first set 6-2, but Azarenka, who had come from a set down to defeat Maria Sharapova in the semifinal, believed she could make her way back into the match.

She started the second set strongly and was rewarded when Williams started making a few errors, including a double fault and a foot fault early on in the set. The Belarusian was fully into her stride now and she broke serve again to lead 4-1 and comfortably saw out the set.

The third set was even until, at 3-3, Williams made some errors on her serve and Azarenka broke for 4-3 before holding serve to go 5-3 up. However, the pressure of being so close to her first US Open victory seemed to affect Azarenka whereas Serena seemed to grow in belief, buoyed by the crowd. Williams held serve with a big forehand down the line and broke the Belarusian’s serve to level the match, before holding serve again to move 6-5 ahead.

Azarenka was unable to cope with the power coming from the other side of the net and could not hold her serve to force the tiebreak, meaning Williams had her fourth US Open and completed her ‘golden summer’ after winning Wimbledon and gold at the Olympic Games.

Serena admitted that she had doubts during the final set. “I honestly can’t believe I won,” said the American, “I was preparing my runner-up speech because she was playing so great.” Azarenka praised her opponent and announced to the crowd that she regretted nothing despite coming so close to victory “I’m honoured to stand with such a true champion here. I definitely gave it my all today, stepping out of this court I have no regrets.”

The second men’s semifinal between Novak Djokovic and David Ferrer was also decided on Sunday after play was abandoned on Saturday due to the New York authorities evacuating Flushing Meadows. With improved weather conditions, Djokovic progressed 26 61 64 62.

Ferrer, who had adapted to the weather the better of the two players, led Djokovic 5-2 when play was halted and quickly wrapped up the first set after play resumed, taking it 6-2. However, with the improved weather came a rejuvenated Djokovic who settled quickly and showed why he had not dropped a set before the semifinal.

Some brutal hitting, coupled with an unusual number of unforced errors from the Spaniard, allowed Djokovic to race through the second set, taking it 6-1. The second set started much the same as Djokovic moved 2-0 up, but Ferrer then won eight points in a row to force his way back into the set. He was, however, powerless to prevent Djokovic winning the set and moving ahead in the match.

The world No. 2 then quickly moved into a 4-0 lead in the fourth set, and, although Ferrer never stopped fighting, Djokovic’s pinpoint accuracy from the back of the court allowed him to control points and eventually he took the fourth set 6-2. Djokovic knew he hadn’t handled the weather as well as his opponent, “he handled the wind much better than I did but I came in today as a different player and I’m just really happy to get to another Grand Slam final.”

That final will be against Andy Murray on Monday night after the world No. 3 beat Tomas Berdych in the first semifinal 57 62 61 76(7) on Saturday. Djokovic has won eight of their 14 meetings, including their only meeting at a Grand Slam at last year’s Australian Open, but Murray won their last encounter in the semifinals of the Olympic Games, which he went on to win.

The winners of the junior championships were also decided on Sunday as Canadian Filip Peliwo and American Samantha Crawford won their finals.

Peliwo, the first boy to win back-to-back Wimbledon and US Open titles since Bulgaria’s Grigor Dimitrov in 2008 and the first since Mark Kratzmann in 1984 to make it to all four Grand Slam finals in the same year, survived an impressive comeback from Britain’s Liam Broady to prevail 62 26 75.

Crawford, who qualified for the women’s singles event, was unseeded, but upset 12th seed Annett Kontaveit of Estonia 75 63 to win her first Grand Slam title.

The women’s doubles final also took place on Sunday with Sara Errani and Roberta Vinci, who faced each other in the quarterfinals of the singles competition, beating Olympic silver medallists Andrea Hlavackova and Lucie Hradecka 64 62. —- ITF/Photo: Paul Zimmer