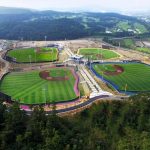 With baseball’s position as the biggest spectator sport in the Republic of Korea, the bid to host the U-18 Baseball World Cup — one of the top youth World Championships in all of sports — received the official backing of the nation’s Ministry of Strategy and Finance, and Ministry of Culture, Sports and Tourism.

Gijang-Hyundai Dream Ballpark, the largest youth baseball facility in Korea, will be the stage of the U-18 Baseball World Cup 2019.

The main venue has a seating capacity of 1,295.

“WBSC is thrilled to have the U-18 Baseball World Cup 2019 go to a major baseball centre and host like Gijang, Korea.

I am confident that KBSA and Gijang will provide the best stage possible for hosting baseball’s next generation of stars, delivering worldwide coverage for our sport and raising the anticipation of the 2019 Premier12 and Tokyo 2020 Olympic Games, which will be some of the biggest international baseball events in history.”

We will do our best to provide the ideal setting for the world’s best young baseball players, who will go on to become our sport’s future leaders.

In addition, as the defending Olympic and Premier12 champions, it is essential to drive global interest while spotlighting Korean and Asian baseball on the road to the Tokyo 2020 Olympics and beyond.”

“I believe that Gijang will become the baseball capital of Korea through this WBSC Baseball World Cup.

The successful staging of the U-18 Baseball World Cup 2017 in Thunder Bay, Canada, helped the Thunder Bay International Airport break its all-time monthly passenger record for the month of August, while generating a CAD$ 6.3 million economic impact on the city of Thunder Bay and multi-millions in brand exposure for sponsors and commercial partners. —- WBSC