Home  »  OTHER SPORTS   »   Treading in Most Illustrious Footsteps 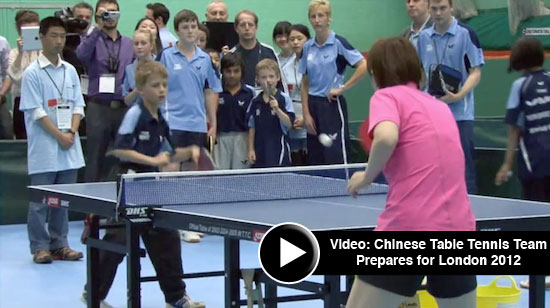 Lausanne – Switzerland, July 22, 2012: Footsteps, The London 2012 Olympic Games is for Ding Ning and Li Xiaoxia their first appearance in the prestigious multi-sport event; it is a whole new experience. They carry their nation’s hopes and they have the added burden of the weight of expectation.

Always, since the 1988 Olympic Games in Seoul, the winner of the Women’s Singles gold medal has been China.

It is a country that expects the tradition to be maintained, the overwhelming view is that one will depart with gold, the other with silver. China won 41 medals out of the total 76 including 20 golds from the total 24 during table tennis Olympic history.

Unquestionably, the Olympic Games is different from any other sporting contest, it has its own special aura, its own unique status in sport; perhaps the fact that the event is only held every four years adds to its special status.

In that tournament, seven Chinese players, the maximum, competed in the Women’s Singles event; one lost but there were six to follow.

At the London Olympic Games, the number is only two; previously there has been three. One loses and there is only one left; the pressure is greater. Furthermore, both Ding Ning and Li Xiaoxia are on debut in the Olympic Games. Does that add to the pressure?

It may so be but they can take confidence from the fact that every Women’s Singles gold medallist in the table tennis events at the Olympic Games won on debut.

However, all her successors won on debut. Deng Yaping won in Barcelona in 1992 and then retained the title in Atlanta four years later. She was succeeded by Wang Nan in Sydney before Zhang Yining clinched gold in Athens in 2004 and, like Deng Yaping, retained her title by winning in Beijing in 2008.

In the Galatsi Olympic Stadium, Zhang Yining’s two colleagues had suffered unexpected defeats. Niu Jianfeng had lost to DPR Kim Hyang Mi in four straight games in the fourth round, one round later in the quarter-finals, Wang Nan had been beaten by Singapore’s Li Jiawei in five games.

For the only occasion to date at an Olympic Games; only one Chinese player had reached the Women’s Singles semi-final; the pressure was squarely on the shoulders of the young lady from Beijing.

She beat Korea’s Kim Kyungah in five games at the semi-final stage and Kim Hyang Mi in four straight games in the final. The mental fortitude of Deng Yaping and Zhang Yining has made them living legends not only in table tennis but in the whole of sport.

London 2012 marks the debut for Ding Ning and Li Xiaoxia, but for Ma Lin, the Men’s Singles Title Holder who could not get his place in the Chinese Olympic team, he will not be able to defend his title. —- ITTF