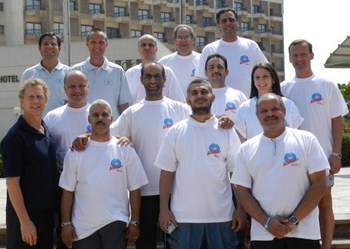 Lausanne – Switzerland, Sept 19, 2012: Egypt hosted its 7th FIG Academy from September 10 – 17, 2012. This time it was a Level 2 Academy for Trampoline Gymnastics, marking the 17th Academy of this year and the 135th overall in the 10-year old Academy programme.

The course was held in the National Olympic Training Centre in Maadi, Cairo. As always, the content included theory lectures on biomechanics, anatomy, physiology, psychology and planning and technical lectures on trampoline, tumbling and double mini-tramp.

The Academy was attended by 11 coaches, but only from Estonia and Egypt of the 14 countries that were invited to send their eligible coaches.

The course leader was Dr. Keith Russell of Canada who is President of FIG’s Scientific Commission and served on the Academy working group for Trampoline Gymnastics. At this Academy he taught all of the theory lectures. Michael Kuhn, the national coach of Germany and also a member of the Academy working group taught all of the Trampoline technical lectures. Eduard Mendes, the national Tumbling coach of Portugal taught Tumbling and Double Mini-trampoline.

Most participants achieved a very satisfactory score and some achieved exceptional scores on the combined theory and practical examination. The highest mark of 91% was achieved by Ahmed Hanza Zidan of Egypt. He was followed closely by two who achieved the same second highest result – Viktor Saaron of Estonia and Farida Sherif Amin of Egypt.

The FIG would like to thank the Egyptian Gymnastics Federation for hosting Academies on seven occasions and its liaison persons for their cooperation at this Academy: Lamia Zakr, Kaled Hossny Fouda and the federation staff members Salma Hassan and Shaimaa Ali who ensured a smooth running and well organised course. Four lectures had simultaneous translation to Arabic and for that we would like to thank Dr. Mohamed Zaid and Dr. Noha Demerdashand Amr Mostafa (President of the Egyptian Trampoline Technical Committee).

A very busy September with five events for the Academy programme continues with a Foundations of Gymnastics Course soon to be completed in Mexico and an Aerobics Academy just beginning in the Republic of Congo. —- FIG