Home  »  OTHER SPORTS   »   Top Players Head back to the Lucrative 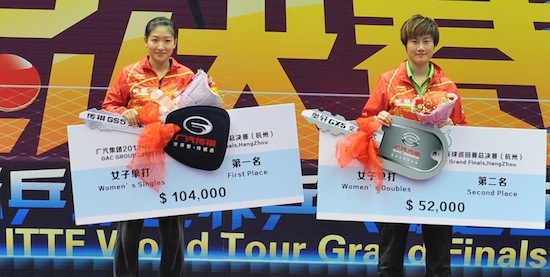 The 2013 ITTF World Tour heads to China (12-16 March in Changchun, China), followed by Japan (19-23 June in Yokohama, Japan), after events in Spain, Austria, Kuwait, Qatar, Korea, Cairo and Croatia have already been successfully held earlier in the year.

The year will see the world’s best table tennis players travel to five continents for a truly global tour, seeking to gather enough points to be in the top 15 and thus gain invitations to the World Tour Grand Finals.

“The ITTF is very proud to be able to raise the prize money to the level where we are able to put the money into the people who deserve it, the stars of our sport, the athletes”, stated ITTF President Adham Sharara. “We will continue to work hard to bring new partners and new sponsors to invest in our sport, to keep raising the level of prize money on offer.”

In addition to the outstanding prize money on offer for the ITTF World Tour, the world’s leading table tennis players are also competing for a total prize pool of US $568,000 over three World Cups: the World Team Classic (28-31 March 2013 in Guangzhou, China), the STARTS Women’s World Cup (21-23 September 2013 in Kobe, Japan) and the LIEBHERR Men’s World Cup (25-27 October 2013 in Verviers, Belgium).

The prize money is not just limited to the senior players. The juniors battle it out for US$ 235,800 during the 2013 Global Junior Circuit, a circuit which saw 2,145 potential Olympic champions of tomorrow from 97 countries competing in 2012. An even higher participation rate is forecasted for 2013. All these events combined brings the total prize pool for ITTF events in 2013 to a staggering USD$3,315,000. —- ITTF