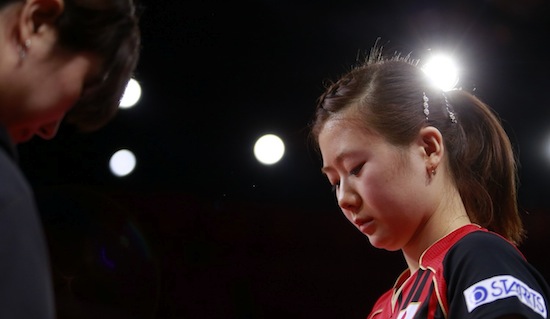 Paris – France, May 16, 2013: The Japanese pair of World no. 10 Jun MIZUTANI and Olympic silver medalist Ai FUKUHARA have been sensationally knocked out in the first round of the LIEBHERR 2013 World Table Tennis Championships in Paris, France.

MITZUTANI, who was seen to be one of the biggest challengers to the Chinese for gold in Paris, was beaten by unheralded Czech player Pavel SIRUCEK who is ranked 121 places below the 23 year old 6-11,11-5,4-11,11-8,12-10,11-8. This defeat shows the gap between Europe and Asia is closing.

MITZUTANI’s teammate FUKUHARA, who has become an icon in Japan after she spearheaded Japan to the silver medal at London 2012, was simply outplayed by South Korean qualifier PARK Seong Hye in a morale destroying 4-2 defeat.

“My understanding of my opponent was not that good. I have never played against her in international competition yet so my preparation was not that complete,” an absolutely devastated Ai FUKUHARA said after the match.

The French pair of Adrien MATTENET and Simon GAUZY had the large crowd at Palais Omnisport de Paris Bercy bouncing as they both won their respective men’s singles matches convincingly.

MATTENET stated: “I was pretty nervous at the end of the match, because I wanted the win so much in front of my home crowd. I was so glad that I could win and move onto the next round.”

Legend Werner SCHLAGER, who won the world championships in this exact venue 10 years ago, started his campaign with the world’s eyes on him. The 40 year old looked rusty in the opening few sets, but used all his experience to beat Belarusian Pavel PLATONOV 9-11,11-8,1-11,7-11,12-14 and keep the fairytale going another day.

Apart from the Japanese pair, the rest of the tournament’s top seeds managed to get safely through to the 2nd round.

Defending champions DING Ning and ZHANG Jike looked in fantastic form as they easily dispatched their opponents to keep their title defence alive. Visit ITTF.com to review the full results from day 3 of the 52nd World Table Tennis Championships and to check out the playing schedule for day 4. —- ITTF/ Photo by Remy Gros