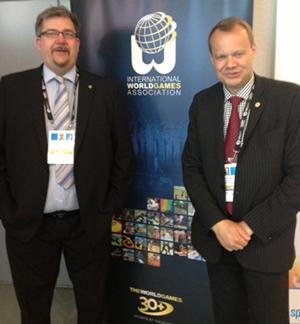 Finland, May 27, 2013: This decision was taken during the IWGA Annual General Meeting organised in connection with the SportAccord Convention 2013 in St. Petersburg. The IWGA is the body organising the multi-sport event – the World Games every fourth year. This year’s edition of the World Games will be organised in Cali, Columbia.

IFF was approved as a new member together with Lacrosse and Muaythai. The IWGA AGM further decided that after the Cali World Games all sports on the program will have to re-apply for participation in the next, 2017 World Games in Wroclaw, Poland. IFF Secretary General John Liljelund and IFF President Tomas Eriksson.

The positive decision of the IWGA Annual Meeting is a great step forward for floorball. The floorball family will now do everything in its power to convey the added value that we can give the World Games, in order to be accepted on the program of the Games, says Mr. Tomas Eriksson, IFF President.

Appearing in the World Games is seen as the first step on the road to inclusion in the Olympics. Floorball has previously been an invitational demonstration sport in the 1997 World Games in Lahti, Finland. —- IFF