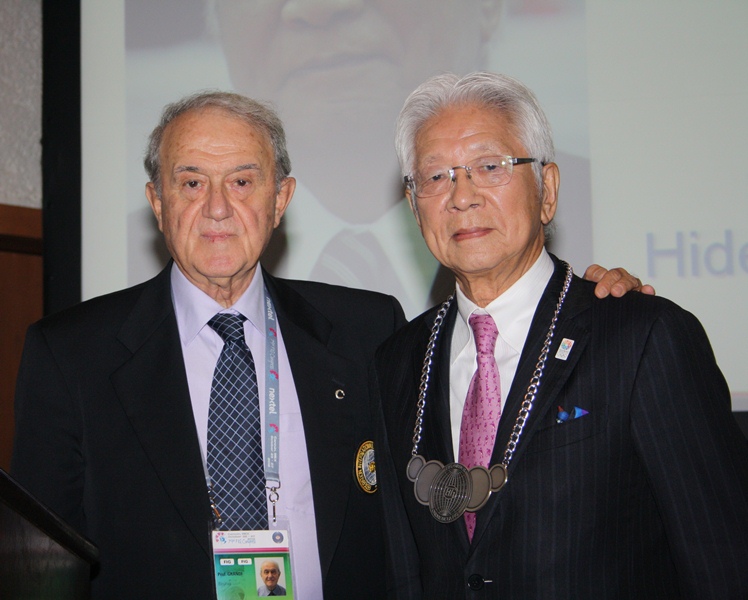 Cancun (MEX), Oct 27, 2012: Established by decision of the FIG Executive in February 2012, the FIG Order was awarded for the first time Mr. Hidenori Futagi (JPN), President of the Japanese Gymnastic Association, and member of the FIG Foundation. This distinction honors the many humanitarian organized and funded by philanthropist in the world of sport and more particularly that of gymnastics.

PORTRAIT OF A DISCRETE GENTLEMAN

Hidenori Futagi san, 75 years old, is a well-known Japanese economic figure. He is the former head of the number 1 supermarket chain Aeon, which he established himself in Japan. A shrewd businessman, he created a line of low-cost products, from groceries to electrical appliances, and put them on the market. His success was instant.

However, his approach was not purely commercial. With a visionary, he realized quickly that the risk of high economic growth will affect children. He felt it is a mission for him to raise them in physically and mentally.

AEON Co., Ltd. is the largest company in Japanese retailing industry, 17th in the world (5 trillion yen in terms of sales in 2011), actively engaging in social action programs. More than 2 million trees have planted in Japan, China, Cambodia, Laos, Vietnam and some African countries with a tree-planting campaign. AEON Co., Ltd. has built 140 schools in Cambodia, 57 in Nepal and 120 in Laos, 326 schools in total, has provided opportunity to study in school for more than 200,000 children with a partnership with the Japan Committee for UNICEF. 30 more schools will be opened in Vietnam by the end of this year and construction of 30 schools in Myanmar by 2016 has projected.

Also he established Japan Rhythmic Gymnastics Federation in 1993. His concept was to run the clubs individually and to train the gymnasts for Olympic at the same time as business success. He insists that the prevalence and the strengthening are like “both sides of the wheels”. Not having either of these, you cannot go forward. Many people felt the same and the number of the clubs became over 600 in Japan.

Through Gymnastics, Hidenori Futagi has instigated some spectacular initiatives on behalf of child prisoners of conflict, refugees, and gymnasts among the poorer communities or, more recently, victims of devastating earthquakes and tsunamis. His name is never mentioned and his appearances are discreet. His priority is the victims, and the spotlight belongs to them. Hidenori Futagi leads his humanitarian campaigns with modesty and restraint.

On March 11, 2011, along with millions of television viewers around the world, Hidenori Futagi watched helplessly as nature brought its terrible force to bear on the Sendai region of his own country. It was a disaster that shook Japan and the world was consumed with emotion.

But while some submitted to self-interest and refused to support the organization of the Artistic Gymnastics World Championships in October, seven months later, Hidenori Futagi reached out to gymnasts from 81 different countries and conducted a campaign of solidarity uniting victims of the disaster with the international gymnastics community. Persistent, consistent and persuasive, the campaign delivered its message with quiet efficiency and restored the confidence of the gymnastics community.

On October 11, 2011, seven months after the earthquake and deadly tsunami, Hidenori Futagi was in Sendai, along with FIG President Prof Bruno Grandi, to honour the victims. And five days later, on October 16, in front of the television cameras of Fuji TV and during the final medal ceremony at the World Gymnastics Championships, there was a cheque for US$100,000 that he had donated to the Japanese Red Cross for the reconstruction of the disaster areas.

A gesture from the heart

But the true personality of Hidenori Futagi is much more than just a patron or a philanthropist. Both mischievous and curious, he enjoys travelling, discovering and meeting people. He is a bon-vivant who relishes sampling all of earth’s riches with his wife, who follows him everywhere.

As noted by FIG President Grandi, “it is also an example to follow in terms of Fair Play, accepting decisions, bending the rules with respect for institutions. His selfless attitude, giving much and asking little, earned him the esteem of all.

In 1993, he was selected for the prime minister’s trade award. In 1995, he won the Medal with Purple Ribbon, for contributions to academic fields, arts and sports.

The man symbolizes everything that Japan has elevated to a cardinal virtue, namely education, sophistication, and the elegance of a discreet gesture. Not to mention the effectiveness of a Samurai sword. —- FIG