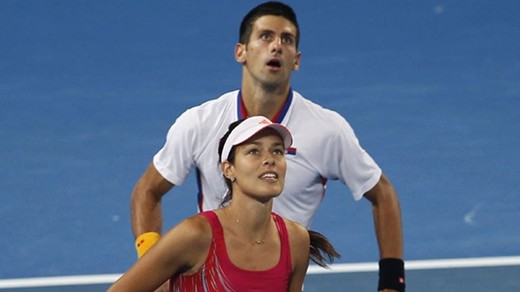 Perth – Australia, January 02, 2013: Serbia won their second match in this year’s Hopman Cup following a thrilling encounter with Australia. From looking at the two teams, you might have thought this was a straightforward victory for Serbia, but in reality they were pushed all the way by Australia’s young guns.

The first match saw world No. 1 Novak Djokovic take on Bernard Tomic. The Australian was a prolific junior but is yet to live up to his potential. However, he showed signs of what he is capable of as he beat the Serb 64 64 to get Australia off to a perfect start.

The women’s singles was next and it seemed to be another mismatch. Ana Ivanovic is a former world No. 1 whereas her opponent, Ashleigh Barty, is only 16 years old and ranked over 150 places lower. Barty was a late inclusion in the Australian team after Casey Dellacqua was forced to pull out of the tournament with a foot injury. There was no upset for the Australian in this match though as Ivanovic was in top form and won comfortably 62 63.

With one win apiece, the stage was set for the mixed doubles. The Serbians were the clear favourites but the Australians had the crowd behind them. The first set went to Serbia 6-4, with Novak Djokovic serving it out with minimal fuss following an early break.

The second set started in much the same way as the first with each player holding serve, but, at 2-3 the Serbians were put under pressure and the Australians had the break they so desperately wanted. However, they could not capitalise and Serbia broke straight back, before levelling the set at 4-4. Next came two holds of serve before Serbia broke Ashleigh Barty’s serve to move 6-5 ahead and in position to serve for the match.

One of the best rallies of the tournament gave Serbia a match point but they could not take it. This seemed to spur on the Australians and they managed to break back to force the set into a tiebreak. Serbia got the early break in the tiebreak to move 4-2 up but the Australians refused to lie down and eventually broke back to level the tiebreak at 5-5.

Serbia then moved 6-5 up for their second match point. If the point in the game at 6-5 was good, this point was sensational. A fantastic point putting everything great about doubles matches and Hopman Cup on display, ultimately ending in the Australians saving another match point. This rejuvenated the young Australian pair and they went on to win the tiebreak at the third time of asking 10-8. This forced a super tiebreak.

The super tiebreak followed the same pattern as the tiebreak at the end of the previous set and the Serbians broke to lead 4-2. Again the Australians fought back to make it 7-6, but the Serbians ended their resistance with some blistering hitting and took the super tiebreak 10-6. It was one of the best matches in recent Hopman cup history, and a real treat for the record crowd of over 13,500 fans.

They did not get off to the best of starts, however, as Tommy Haas beat Andreas Seppi 76(3) 76(7) in a thrilling match. It was always going to be closely contested, with the players separated by just two places in the rankings, and it proved to be very close indeed. Despite Seppi’s superior serve, he could not win points when it mattered in the tiebreaks and the wily Haas triumphed in a hard-fought contest.

This meant that Francesca Schiavone would have to beat Tatjana Malek for the Italians to have any hope of progressing to the final. Malek did not play in Germany’s first match but has been called up following a knee injury to Andrea Petkovic.

Schiavone started the match in blistering form manoeuvring her opponent around the court and seemingly winning points with ease. Schiavone was 3-0 up in no time at all, but then Malek held serve, much to the crowd’s delight. No one would have predicted what happened next. Malek won 5 games in a row to take the first set 6-3 which shocked the crowd and her Italian opponent. Schiavone was struggling and Malek could seemingly do no wrong.

Malek moved 3-2 up in the second set but could not shake off Schiavone. The Italian worked tirelessly to force a break point, which she converted and then went on to win the second set 6-3, levelling the match. From that moment on, there was only one winner as Schiavone raised her game and Malek struggled. A break mid-way through the third set was all Schiavone needed to secure her victory.

This set up a deciding doubles match yet again in the competition. The German pair were always likely to struggle in the doubles as they had only met up at the start of the day. The Italians broke in the first game of the match and it proved to be decisive as the only break of serve in the first set which the Italians took 6-4. The second set was a complete contrast. There were six consecutive breaks of serve and when Malek was broken for the fourth time in the match, it gave Schiavone the opportunity to serve the match out, which she did.

Italy have a slim chance of qualifying for the final, should other results go their way, but Germany now play for pride as they look to secure their first win of the competition against top seeds Serbia. —- ITF/Photo: Theron Kirkman / Professional Sport