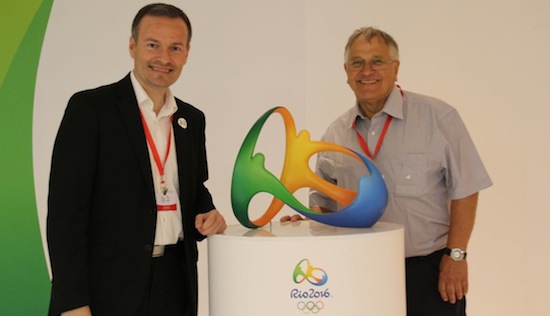 Following the site visit at Riocentro, where the Olympic Table Tennis event will be held, Mr Harwood stated:

“I am extremely impressed by the efficiency and enthusiasm showed by the Rio 2016 staff, they have really learnt a lot from being observers at London 2012.

They have the mentality that the athletes are the most important people of the Games, as without them, there would be no Olympic games. This is the attitude of the ITTF, so it was very refreshing to hear.

The ITTF’s philosophy is that we want to make each Olympic Games Table Tennis event better than the last and with Brazilians love and passion for sport, we are very confident that this will be the case.

The Table Tennis hall in Riocentro will be very similar to the ExCel at London 2012, as it is a very big, and open convention center which hall #3, dedicated for table tennis may hold up to 6,500 people, creating an electric atmosphere.

We are very happy with the location of the center as it is within walking distance from the Olympic village, and very close the Olympic stadium, so the Olympic sprit will be very strong.

These facts, together with the ITTF and San-Ei promising a revelatory table for the event, are great news for all the world’s table tennis fans looking forward to the 8th edition of Olympic Table Tennis. —- ITTF