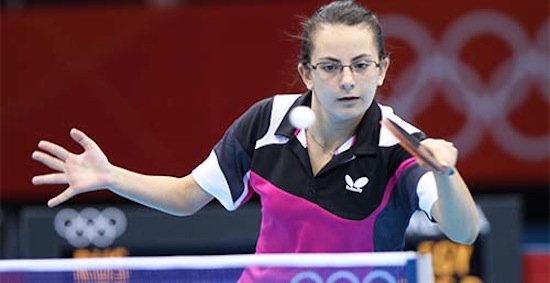 Cairo – Egypt, Nov 20: Egypt clinched both the Men’s and Women’s Team titles at the ITTF-Africa Championships in Cairo on Monday 19th November 2012, both outfits overcoming Congo Brazzaville to arrest the titles.

However, the victories were recorded in contrasting circumstances.

The trio formed by Ahmed Saleh, El-Sayed Lashin and Omar Assar posted a comprehensive three matches to nil victory in the final to secure the top step of the Men’s Team medal podium but for their female counterparts it was a different scenario.

In a competition where matters were organised on an all-play-all basis, Egypt and Congo Brazzaville entered the third day of action as the only two unbeaten teams. A full distance five match duel was the end result with Dina MESHREF emerging as the mainstay of victory and Nadeen EL-DAWLATLY as the heroine of the hour.

Nadeen EL-DAWLATLY won the vital match when the overall score in the contest was level at two matches apiece; she beat Jolie MAFUTA IVOSO in three straight games to secure the gold for Egypt (11-2, 11-2, 11-8).

However, in reality it was the one preceding match and the outstanding efforts of Dina MESHREF that secured victory. In the penultimate duel of the contest, with Egypt trailing by two matches to one, she beat HAN Xing (11-9, 10-12, 11-8, 11-7) a player who had not surrendered a single game prior to her confrontation with the 18 year from Cairo.

Conversely in the Men’s Team final, there were no moments of anguish for the host nation. Ahmed SALEH defeated Suraju SAKA in the opening encounter; he was followed by El-Sayed LASHIN who overcame Saheed IDOWU (9-11, 11-6, 11-3, 11-5), with Omar Assar completing proceedings. He defeated Stellin NTANDOU (11-4, 11-8, 11-3).

Two titles for Egypt and a third is also guaranteed. Omar ASSAR and Dina MESHREF meet El-Sayed LASHIN and Nadeen EL-DAWLATLY in the Mixed Doubles final.

The final will be played on Wednesday 21st November, Tuesday 20th November is a rest day. —- ITTF/ Photo by An Sung Ho