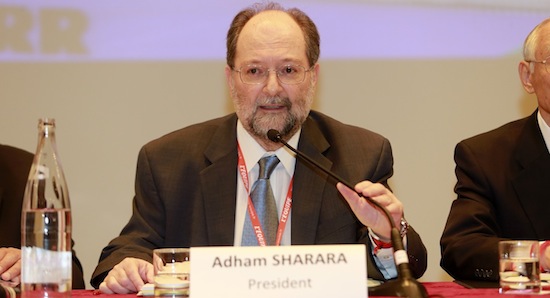 Paris – France, May 15, 2013: Mr. Adham SHARARA (CAN) has been elected as the International Table Tennis President today at the 2013 ITTF Annual General Meeting in Paris, France. He overcame the challenge from European Table Tennis Union President Mr. Stefano BOSI (ITA) and will add 4 more years to the 14 that he has already served in ITTF’s top job.

Mr. Adham Sharara stated: “I am extremely pleased that as expected, the delegates of the AGM understood the importance of my work and understood very clearly our future plans. The overwhelming support for my team and myself gives us extra motivation to try as hard as possible to make sure table tennis is in the top 5 sports in the world.”

The race for the 2016 World Team Table Tennis Championships took a twist, as the AGM approved the proposal for Kuala Lumpur, Malaysia to host the 2016 edition and 2018 to be held in Halmstad, Sweden due to the high quality of both bids.

In other business at the 2013 AGM, 3 members of the Chinese Table Tennis team that was recently nominated for a Laureaus sport award, Ma Long, Li Xiaoxia and Zhang Zike were inducted into the ITTF Hall of Fame.

Bonaire were also confirmed as the 218th Table Tennis National association, which leaves table tennis just 2 associations short of Volleyball, who currently has the most national federations of any sport.