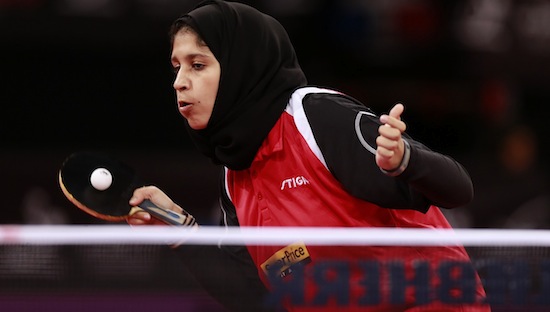 Paris – France, May 13, 2013: A record number of table tennis players from every possible corner of the globe have descended onto Paris, France for the opening day of the LIEBHERR 2013 World Table Tennis Championships.

449 Men and 352 Women (801 in total) representing 127 associations ensures Paris surpasses the record set by last individual championships hosted in Rotterdam, Netherlands in 2011 which saw 678 players from 114 associations battle it out for gold.

ITTF President Adham Sharara stated: “These impressive numbers is a credit to our strong development program that we have been running for the past 10 years. More people and more countries than ever are now playing table tennis.”

Antigua and Barbuda are the latest addition to the World Table Tennis Championships family, participating in the event for the first time by entering 2 men into the singles.

The World Table Tennis Championships sees the top 64 seeded players getting direct access into the main draw which starts on Wednesday, while the rest of the players fight it out today and tomorrow in the qualifications to claim the remaining 64 spots in the 128 main knockout draw.

The global nature of the event was portrayed by some of the matches that only a table tennis event could provide, such as: Tajikistan v Uganda, Moldova v Madagascar, Turkmenistan v Nepal and many more, which kept the Parisian crowd enthralled all day.

For many of the players playing today, it was a realization of a lifelong dream to play at a World Table Tennis Championships, especially in the iconic 12,000 seat Palais Omnisports de Paris-Bercy.

“I was so excited; it’s my first World Championships, my first time in such a big arena”, said Thailand’s Tamolwan Khekhuan. “I was so nervous.”

In addition to the record amount of players, 248 journalists from 38 countries and over 200 TV rights holders have been accredited for the 52nd edition of the World Table Tennis Championships making it truly a global spectacle.

Audiences from all over the world will be able to watch the live TV broadcast of the event, including in China, Singapore, Malaysia, Japan, Chinese Taipei, USA, Mexico and right across Europe with Eurosport and Africa through Al Jazeera, plus many more, making it the most widely distributed table tennis event in history outside the Olympic Games.

To recap all the action from the first day of the LIEBHERR 2013 World Table Tennis Championships, go to YouTube.com/ITTFChannel, where you can find daily:

• Highlights of all the main matches

• Hot shot of the day