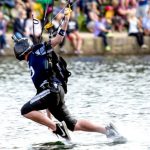 Swoop – Freestyle Canopy Piloting – is a high-impact, adrenalin-fuelled discipline, involving parachutists flying at high-speed across a body of water (“the Pond”) to score points based on style and execution. Usually held on airfields – parachute drop zones away from the public eye, the FAI is working with the organiser A. Sports to showcase the new sport.

FAI President Frits Brink commented: “The high-adrenalin sport of swoop is growing rapidly in popularity and is a thrilling spectator sport.

Following the success of 2017’s inaugural Swoop Freestyle World Championships, the FAI is delighted to work with A. Sports again to showcase the sport at the two international events in 2018.”

George Stribling Blythe, CEO of A. Sports, organisers of Swoop Freestyle FAI World Championships, commented: “We have a vision for the sport and its future that we are delighted to be realising with FAI.

We are appealing to a new generation of sports consumers, brands, media and hosting cities. For us the sky is no longer the limit.”

The organisation of the events will be the responsibility of A. Sports, while the FAI will sanction the competitions and is helping to develop the rules. The agreement was signed in 2017 for an initial three-year period.

Other responsibilities that the FAI and the FAI Parachuting Commission (IPC) will hold include:

18 competitors from 11 countries will attend both events.

Technical detail Swoop Freestyle World Championships
Freestyle Swooping is an air sports discipline that involves competitors flying at high speeds across a body of water in order to score points based on style and execution.

Each competition round, the athletes jump out of a helicopter at 1500m/5000 ft altitude, then release the canopy straight away, before navigating towards the water surface (Swoop Freestyle World Championships).

Starting 600m/2000ft above the landing area, they start a series of turns up to 1080 degrees in order to generate great speeds of up to 150 km/90 miles per hour; they use the speeds to propel themselves into executing highly technical freestyle moves across the body of water, prior to landing on the floating platform (Swoop Freestyle World Championships).

San Diego – second and final leg of the world championships

About FAI
FAI, the World Air Sports Federation is the world governing body for air sports and for certifying world aviation and space records. The FAI was founded in 1905 and is a non-governmental and non-profit-making organisation recognised by the International Olympic Committee (IOC).