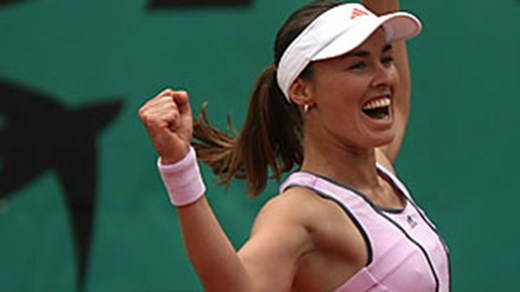 Newport, R.I, USA – Mar 05, 2013: Martina Hingis, a former world No. 1 and winner of 15 Grand Slam tournament titles in singles, doubles, and mixed doubles, has been elected to receive the highest honour in the tennis, enshrinement in the International Tennis Hall of Fame.

Monday’s announcement, which comes as part of the World Tennis Day festivities, also sees longtime ESPN tennis broadcaster Cliff Drysdale, tennis promoter and industry leader Charlie Pasarell and Romanian tennis great Ion Tiriac, who has been recognised for his work in growing the sport as an influential player manager and successful tournament promoter, elected to receive the honour alongside the previously announced Thelma Coyne Long, a winner of 19 Grand Slam titles. The class of 2013 will be honoured on Monday 4 in a Centre Court presentation at Madison Square Garden during the BNP Paribas Showdown.

“Being inducted into the International Tennis Hall of Fame is tremendous honour,” said Hingis. “It is truly a privilege to be part of such an exclusive group of tennis icons. I am looking forward to the enshrinement weekend in Newport and to being welcomed in by the other Hall of Famers.”

International Tennis Hall of Fame President Stan Smith said, “Having achieved world No. 1 status in both singles and doubles, and having won an incredible 15 Grand Slam tournament titles, Martina Hingis is undoubtedly one of the world’s elite tennis players, and we are glad to pay tribute to her among the legends of the sport.”

Smith, who is also the chairman of the Enshrinee Nominating Committee, also commented, “Cliff, Charlie, and Ion all had success in tennis at the top levels, but they also had visions for the sport’s immense potential for growth, and they have dedicated their lives and careers to making that happen.

“Tennis is better for having had the leadership of these three men, and Hall of Fame enshrinement is a well-deserved tribute in recognition of all they have done for our sport. Also, during the Australian Open, we had the opportunity to notify Thelma Coyne Long of the good news of her enshrinement, and she was delighted. She is one of the greatest Australian tennis players of all time, which already places her in outstanding company, and now she will be forever celebrated among the best in the world. I look forward to welcoming all five honorees into the Hall of Fame this year.”

The five new Hall of Famers are joining elite company among the world’s best tennis players and industry leaders and innovators. Since 1955, the honour of enshrinement in the International Tennis Hall of Fame has been presented to just 224 people. Hall of Famers hail from 19 countries— a testament to the global appeal of the sport. —- ITF/Photo: Paul Zimmer

View all posts by: Abdul Rahim
One Response to “Martina Hingis elected to ITF Hall of Fame”