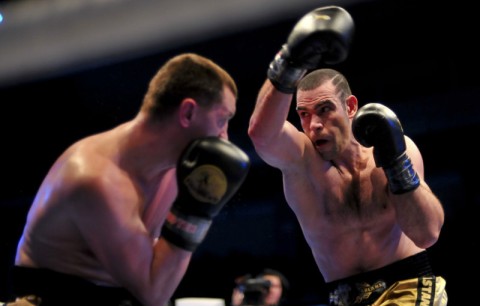 Lausanne, Nov 27: After suffering a heavy defeat away to Russia in their first World Series of Boxing (WSB) outing, the Algeria Desert Hawks will be keen to make amends in Group A when they welcome Azerbaijan Baku Fires at the Salle Hocine-Chaalane on Friday 30 November (15:00 local time). The home team will be hoping that their Algerians, including big guns Samir Brahimi, Abdelkader Chadi and Chouaib Bouloudinats deliver in front of their fans against tough opposition.

Desert Hawks Team Manager Azzedine Agoune was level-headed about the prospect of fighting a team that only lost twice during the whole of last season, “Azerbaijan have some fantastic boxers and have a lot of experience in WSB but we are happy with our team and our London Olympians are keen to show the world what they can do”.

Up first for the hosts will be 22-year-old Brahimi, who made the switch from Paris United over the summer, with the orthodox boxer set to go head-to-head with Azerbaijan Baku Fires’ experienced Uzbek Orzubek Shayimov. The speedy Brahimi will want to get the Desert Hawks off to a good start with a win in this intriguing Bantamweight (50-54kg) battle.

In the next contest of the evening, Algerian Beijing 2008 and London 2012 Olympian Chadi will be looking to make his height and reach advantage count when he faces WSB debutant Isa Isayev at Lightweight (57-61kg). As one of the Algerian team spearheads, the savvy Chadi will want to put on a show against the awkward 22-year-old Azeri southpaw.

26-year-old Abdelmalek Rahou only fought once last season but impressed in his outing for the Bangkok Elephants, and now that he is fighting back in his native country, the tough Middleweight (68-73kg) will want to prove his pedigree. He will be pitted against Georgian sensation Jaba Khositashivili, the European bronze medallist who was recruited by Azerbaijan at the beginning of the season after notching up four wins from his five fights for Istanbul Bosphorus last year. This one will go to the wire.

Khositashivili was confident before the match, declaring, “Our team are in top shape and the atmosphere within the group is fantastic. We are ready for anyone. The trainers are top class and they have been working hard with us since early September so we travel to Algeria intent on claiming victory”. On his opponent, he added, “I know him but will not say more. I am more than ready for him, I am pumped up”.

Light Heavyweight (80-85kg) Nabil Kassal, an addition from the pro ranks, will be testing himself for the first time on the WSB canvas against the Fires’ classy Moldovan Vladimir Cheles in the night’s fourth bout. Cheles is a bright and intelligent operator; the 23-year-old southpaw won his only bout in the competition last season and will push the Algerian all the way.

Desert Hawks superstar Bouloudinats, a veteran of two WSB seasons, will take on up and coming Azeri 20-year-old Heavyweight (91+kg) Ashkab Abdulkhalikov in the final fight of the evening. The Algerian former Astana Arlans Kazakhstan orthodox boxer and the African continent’s top fighter will be relied upon by the team do deliver the goods when it matters.

Bouloudinats was looking forward to the encounter, declaring, “I am now boxing for my own team after a season in China and one in Kazakhstan. I am with my friends and can pass on my experience to the newcomers in the squad. I am delighted that there is now an Algerian team in WSB”. On his opponent, he said, “I do not know him but all Azeri fighters are quality so it will be tough. It is a team that I respect but I want to perform in front of our fans”.

Backed by a passionate and fervent crowd, it will be vital for the Algeria Desert Hawks to get all the points here but Azerbaijan will prove extremely hard to breakdown. It will be a real nail-biter. —- WSB