Dublin, Ireland, Aug 18, 2018: Former Australia international Stephen Larkham has been inducted into the World Rugby Hall of Fame at a special ceremony held in Sydney on the eve of Australia’s Bledisloe Cup opener with New Zealand. 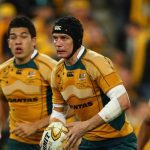 The ceremony, attended by Chairman of the Hall of Fame panel John Eales and fellow team members from the Australian side who historically won the Bledisloe Cup 3-0 in 1998, celebrated Larkham’s decorated career and outstanding contribution to rugby.

Hall of Fame inductee George Gregan, who played alongside Stephen Larkham in a half-back partnership that spanned 73 tests and was central to Australia’s successful reign at the time, had the honour of presenting the prestigious accolade to his former team-mate.

“The older you get and further away from playing rugby, the more sentimental you feel,” said Stephen Larkham

“It’s a nice accolade and something I’m very proud of but I’m very conscious it’s a team sport and I wouldn’t have had any of the success I had without the players around me.

“It was a special period for Australian rugby and I feel very lucky to have been playing when I did.”

Eales said: “It really was a privilege to play with Steve.

He had a wonderful confidence and composure every time he pulled on the jersey of his club, state or country.

Many of us were the beneficiary of that.”

Gregan said: “It was a real pleasure and a lot of fun playing with Stevie for so many years at both the international and provincial level.

I had the best seat in the house in terms of his incredible skills.

He was a match-winner but more importantly an incredible team member who cared for his players.

It was a real honour making the presentation to welcome him into the Rugby Hall of Fame, it was a great occasion.”

O’Gara, Villepreux, Williams and Burgess will attend a prestigious event, which will celebrate their careers and contributions to the game, at the state-of-the-art physical home of the Hall of Fame in Rugby, England on 12 September.

The five latest inductees bring the total in the Hall of Fame to 142 since it began in 2006.

About Hall of Fame:

To be eligible for consideration for the World Rugby Hall of Fame, inductees must have been retired from playing and coaching international rugby for a minimum of three years.

They will have made an outstanding contribution to the game of rugby while also demonstrating rugby’s core values.

At the beginning of each year, World Rugby determines if there is a relevant theme for that year’s inductions and in conjunction with the panel, put a shortlist of candidates together.

The World Rugby Hall of Fame panel vote on the shortlist.

Tudor is a Swiss made watch brand, offering mechanical watches with sophisticated style, superior quality and unique value for money.

The origins of the Tudor brand date back to 1926, when ‘The TUDOR’ was first registered on behalf of the founder of Rolex, Hans Wilsdorf.

He created the Montres Tudor SA company in 1946 to offer watches with the quality and dependability of a Rolex, at a more accessible price point.

Over the course of history, Tudor watches became the choice of daring individuals worldwide on land, ice, in the air and underwater.

Today, the Tudor collection includes flagship models such as Black Bay, Pelagos, Glamour and Style and since 2015 it has offered mechanical Manufacture movements. —- World Rugby Hall of Fame