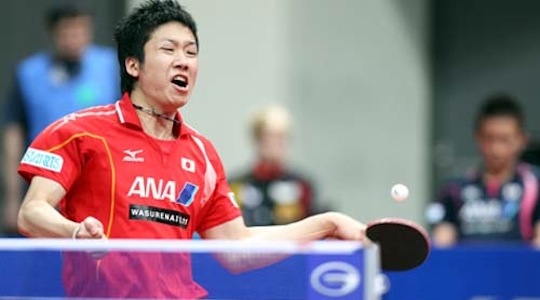 Both will be seeking better fortunes than experienced in Almeria at the recently concluded GAC GROUP 2012 World Tour Spanish Open, when both failed to reached the final. Jun MIZUTANI was beaten at the semi-final stage by CHUANG Chih-Yuan (Chinese Taipei), FENG Tianwei suffered defeat one round earlier; she lost to SHEN Yanfei (Spain).

Neither CHUANG Chih-Yuan nor SHEN Yanfei is present in Santiago but there are major challengers to their aspirations and the strongest challenge could well come from players who excelled in Spain; two Koreans could well have a major impact on proceedings. LEE Jung Woo (Korea) beaten by CHUANG Chih-Yuan in the final in Almeria, is the no.2 seed in the Men’s Singles event in Chile. KIM Kyung Ah (Korea), who won the Women’s Singles title in Spain, is the no.5 seed.

The win in Spain for KIM Kyung Ah ended a drought; the last time she won a Women’s Singles title on Tour was almost seven years ago and that win could be a very good omen for the Korean. In June 2005 she won at the Chile Open in Santiago: in April 2012 she returns to the city of the triumph. Seeded no.2 in Santiago in the Women’s Singles event is Japan’s Kasumi ISHIKAWA. She has debt to settle with KIM Kyung Ah.

At the recent LIEBHERR World Team Championships in Dortmund, Kasumi ISHIKAWA held one match point against the Korean before losing; in Spain she held two match points before suffering defeat in their Women’s Singles semi-final encounter. Seeded no.3 in the Women’s Singles event is Ai FUKUHARA (Japan) with LI Jiawei (Singapore) at no.4.

In the Men’s Singles event, GAO Ning (Singapore) and ZHAN Jian (Singapore) are the third and fourth seeds respectively.

Meanwhile, in the Men’s Doubles competition, the top seeds are: YANG Zi and ZHAN Jian (Singapore), the runners up in Spain when beaten by Kenji MATSUDAIRA and Jun MIZUTANI (Japan); the Japanese duo is also present in Chile. They are the fourth seeds.

A major challenge for honours in the Men’s Doubles event from Japan; in the Women’s Doubles competition it is the same situation. Hiroko FUJII and Misako WAKAMIYA are the top seeds.

Similarly, in the Under 21 Women’s Singles event the Japanese challenge is strong. Kasumi ISHIKAWA is the top seed, with the player she beat in the final in Spain, YANG Ha Eun (Korea) being the second seed.

Also, in the Under 21 Men’s Singles event the winner in Almeria is present. KIM Dong Hyun is the no.5 seed; the top seed is Patrick FRANZISKA (Germany).