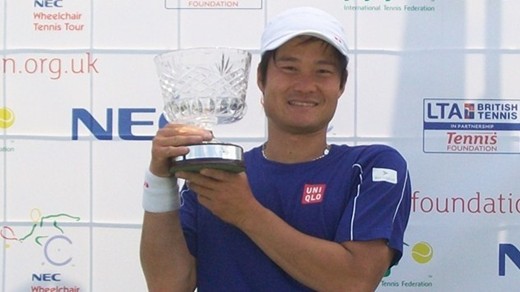 The world No. 4 won the first four games of the men’s singles final against world No. 10 and first-time Super Series finalist Gordon Reid of Great Britain. Reid got his first game on the scoreboard to make it 4-1 and then saved two set points at 5-1 down before edging a deuce game to make it 5-3. However, with Kunieda serving for the set for the second time, the four-time ITF World Champion finally converted his third set point of the match.

In the second set Reid was only able to win one game. Kunieda was firmly in command and the Briton doubled faulted on Kunieda’s first match point to give the Japanese star a 63 61 victory and his first British Open title since 2009.

“Gordon is left-handed, which made it more difficult for me and his power meant he could break back and it was dangerous for me,” said Kunieda. “So I am very happy to win the British Open for the fourth time and it gives me confidence for London, where I want to win my second gold medal.”

In the men’s doubles final Houdet and Jeremiasz eased through the opening set against Dutch second seeds Robin Ammerlaan and Ronald Vink 61. Ammerlaan and Vink took a slender 2-1 lead in the second set, but that was to be their last success as Houdet and Jeremiasz won the last five games to seal a 61 62 victory and claim their third British Open title. The French pair secured back-to-back wins in 2008 and 2009 and finished as runners-up last year.

The women’s doubles final was a rematch of the all-Dutch Wimbledon final two weeks ago and had the same outcome. Second seeds Griffioen and van Koot repeated that win on the grass, defeating top seeds Esther Vergeer and Marjolein Buis in a hotly contested three-set match.

Buis and Vergeer raced to claim the opening set, but Griffioen and van Koot saved three match points to make it 5-5 in the second and then created three set points of their own two games later, only needing the first of them to force the deciding set.

The first of the day’s doubles finals came in the quad event. Gershony and Weinberg won the first set 63 and while Jamie Burdekin and Andrew Lapthorne fought hard to try and take the match to a decider, the unseeded Israeli duo prevailed 63 75. It was Gershony’s second title of the week after winning Saturday’s quad singles final. —- ITF