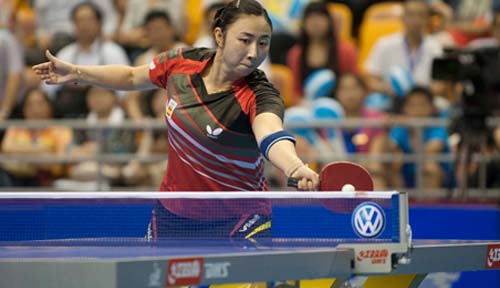 Lausanne – Switzerland, Oct 08, 2012: Third place in the recent Volkswagen Women’s World Cup in Huangshi, a break from competitive play in late 2009 and early 2010 to give birth to her first child, Spain’s SHEN Yanfei enters the top ten of the Women’s World Rankings for the first time in her career. The Spaniard who will marks her 33rd birthday later this year on Christmas Eve is now at no.9 and celebrates yet another career high; the ranking gained in September, one month earlier at no.14, was her previous best.

In Huangshi at the Volkswagen Women’s World Cup, she was beaten at the semi-final stage by Romania’s Elizabeta SAMARA but recovered to clinch the bronze medal by overcoming Singapore’s FENG Tianwei.

Elizabeta SAMARA climbs from no.38 to no.22 as a results of her efforts and thus enjoys the highest ever listing of her career; the previous best was in May 2010 when she stood at no.26.

Also claiming a new career high as a result of her efforts in the Volkswagen Women’s World Cup is Ariel HSING from the United States, the winner of the Intercontinental Cup. She is now at no.73, having previously stood at no.85.

Progress for SHEN Yanfei, Elizabeta SAMARA and Ariel HSING as a result of their efforts at the Volkswagen Women’s World Cup there is progress for China’s LIU Shiwen, the winner and the fourth placed FENG Tianwei.

Both climb one place; LIU Shiwen is now at no.2, FENG Tianwei at no.6. Colleague DING Ning retains top place with LI Xiaoxia, the recently crowned Olympic champion, dropping one place to no.3.

In Liverpool he was beaten by China’s XU Xin in the group stage but after losing to Timo BOLL in the penultimate round, gained revenge to beat the Chinese star in the bronze medal match.

XU Xin who in September won the Men’s Singles title at the GAC GROUP 2012 ITTF World Tour Koltsovs Russian Open remains at no.3 one place behind MA Long.

Russia’s Vasily LAKEEV and Spain’s Sara RAMIREZ won the respective Men’s and Women’s Singles titles at the ITTF Euro-Africa Circuit Egypt Open in Cairo on Sunday 7th October 2012; thus both booked their places in the GAC GROUP 2012 ITTF World Tour to be staged in the Chinese city of Hangzhou from Thursday 6th to Sunday 9th December.

The players finishing in the top four places in the Men’s and Women’s Singles Standings qualify for the Grand Finals; the tournament in Cairo was the last in a series of six.

Defeat for Mikhail PAYKOV in the penultimate round but enough to book a place in the GAC GROUP 2012 ITTF World Tour Grand Finals. He collected 700 points for his efforts and thus finished the year with 2,700 points. Sweden’s Hampus NORDBERG, the winner on home soil in Sweden and Croatia’s TAN Ruiwu, the victor in Croatia, shared second place; each with 3,500 points. ITTF/Photo by Qi Zazheng