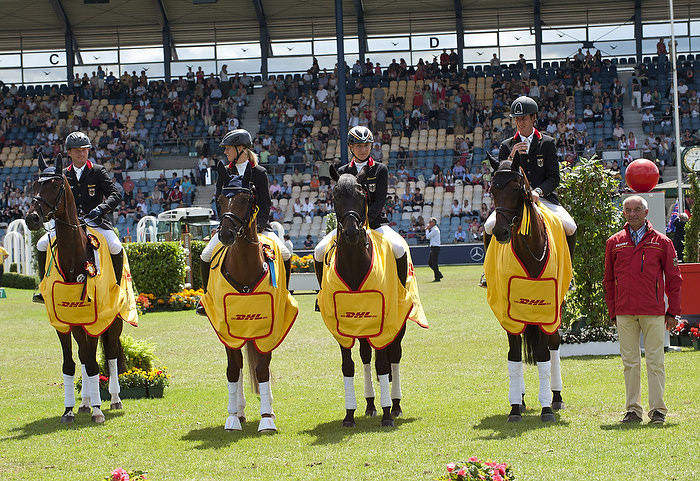 Lausanne (SUI), July 07, 2012: great Olympic, Germany scored a morale-boosting win in the fourth leg of the FEI Nations Cup™ Eventing, held on their home ground at Aachen (GER) and their final selection trial before the London Olympic Games.

The Germans, who also won last month in Strzegom (POL), have now opened up a 20-point lead in the FEI Nations Cup™ Eventing over the Dutch, with two events to run in this new series. Great Britain, the runners-up in Aachen, is in fourth place but on the same points tally as third-placed France.

Australian Christopher Burton took the individual honours on Under Discussion, but he had elected to ride Haruzac (10th) for the team and the Australian effort disintegrated when Sam Griffiths was eliminated across country on Real Dancer and Clayton Fredericks withdrew Bendigo after Dressage and Jumping.

The defending Olympic champions had left nothing to chance in the team contest, fielding European team gold and individual silver medalists Sandra Auffarth (GER) and Opgun Louvo, who finished fourth, plus reigning world and European champion Michael Jung (GER) on his recent Luhmühlen winner Leopin, eighth, Dirk Schrade (GER) on Hop And Skip, seventh, and Ingrid Klimke (GER) with her 2008 Olympic gold medalist Butts Abraxxas, 18th. Klimke was the only one of the quartet not to go clear across country, having a runout at a water complex.

“It was extremely important for the team to win here, for the sport in Germany as much as anything,” commented team trainer Christopher Bartle. “Aachen is such a high-profile occasion in this country and, in the past, Eventing has been something of a “Cinderella” [secondary] sport in comparison to Dressage and Jumping.

“The opposition was very strong this weekend, so there was all the more pressure on us to deliver. But at the same time, I realize this was not the end goal – our mission is to retain our Olympic team gold medal in Greenwich.”

Britain’s Olympic horses had stayed at home, but the team still finished only 4.6 penalties in arrears of Germany after a brilliant start by Laura Collett, who led the Dressage phase with a score of 30.2 on Rayef. She eventually finished third, having dropped her reins on the Cross Country, forcing her to take an unplanned long route, which incurred a few time penalties.

Sweden, fielding only three riders, rose to third place. They didn’t have the best of Jumping phases – all three scored 12 faults apiece – but shone with fast and clear Cross Country rounds. Ludwig Svennerstal finished best, in 11th place on Shamwari 4.

There was mixed success for New Zealand, fourth in the teams. Andrew Nicholson had an excellent competition on his Olympic horse, Nereo, and finished fifth, but Jonathan Paget had a Cross Country stop on Bullet Proof and Lucy Jackson (Kilcoltrim Ambassador) was hampered by a low dressage placing. Mark Todd withdrew NZB Grass Valley after uncharacteristically lowering five fences in the Jumping.

Aachen, which will host the 2015 FEI European Championships for Dressage, Jumping, Vaulting, Reining and Driving, is Germany’s premier showground and first created a Cross Country course, which finishes excitingly in the main arena, for the 2006 FEI World Equestrian Games™.

Course Designer Rudiger Schwarz (GER) is known for his ability to produce imaginative and challenging tracks in restricted spaces and, as usual, his course proved influential.

“The course is super and you can always keep up a nice forward gallop. The crowd is 100 percent behind you and the conditions are excellent,” commented Michael Jung, who also finished second individually on La Biosthetique Sam.

“Regarding the Olympic Games, we have still got some work to do. We have all seen that things don’t always go as planned in the dressage and we have got to improve our fitness, but we have a very strong team that is in great form and mentally very strong.”

The FEI Nations Cup™ Eventing, which is proving popular with riders and team managers, moves south next, to Montelibretto, near Rome (ITA) before what is sure to be a closely contested final at Boekelo (NED) in October.