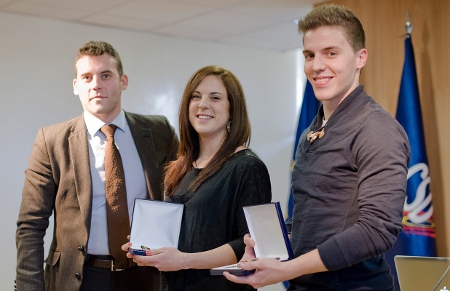 LAUSANNE (SUI), FIG Office, March 8, 2012: On the occasion of the Annual General Assembly of the Royal Spanish Gymnastics Federation, in the Juan Antonio Samaranch Hall of the Superior Sports Council in Madrid, on February 18, gymnasts Sara Moreno (23) and Vicente Lli Lloris (21) received the Spanish sport Medal of Merit, for their Gold Medal in mixed pairs, won in Rodez (FRA), in June 2010, at the 11th Aerobic Gymnastics World Championships.

This distinction, awarded by the Spanish National Olympic Committee, honors these athletes, the whole Gymnastics Iberian community and its many champions, who regularly appear on the top places in the FIG competitions the world over.

Present at the Assembly, the Secretary of State for Sports of the Spanish Government, Mr Miguel Cardenal, presented himself the Sports Merit to Sara and Vicente, moved and excited by this consecration. Jesus Carballo, the President of the Royal Spanish Gymnastics Federation and himself twice world champion on high bar (1996 San Juan – PUR, 1999 Tianjin – 1999) has warmly welcome this award and took the opportunity to congratulate the gymnasts, their coach Sara Lleonart and the Moncada Aerobic Club of the City of Valencia. Image © RFEG