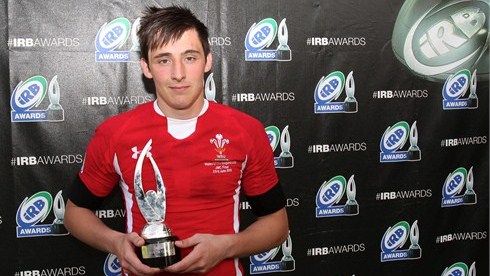 France, June 23, 2013: Wales fly half Sam Davies has been named the IRB Junior Player of the Year 2013 following a thrilling IRB Junior World Championship final at Stade de la Rabine which his side lost 23-15 to England.

Davies is the first Welshman to win the Award, and the first to receive an IRB age grade honour since Gavin Henson was named the IRB Young Player of the Year in 2001.

For the second year running, the public also had a chance to vote on the shortlist via the official Facebook page www.facebook.com/irbjuniorworldrugby.com with more than 2,000 fans having their say.

“I extend my warm congratulations to Sam on winning the IRB Junior Player of the Year 2013 Award. He is a magnificent fly half and he brought this tournament to life with his skills and determination,” said IRB Chairman Bernard Lapasset after presenting Davies with his Award.

“He was pivotal for Wales in some crucial matches, including kicking the conversion which saw them reach their first JWC final, and he has the potential to be a future star of world Rugby. He is a fantastic young player and I wish him all the best for his career ahead.”

“I would also like to send my warmest congratulations to Jack Clifford and Ardie Savea, the other players nominated as they too played their part in making this an incredible tournament.”

Davies said: “It is an honour, just to see the names of the other people that have had it before me, it makes it extra special. I’m gutted with the result today but this is a bonus picking up this Award.”

The fly half was outstanding through the tournament, playing in every round, with his calmness and composure under pressure pivotal, allowing him to be the creative influence to unleash the players outside him and also to kick the conversion that put Wales in the first JWC final.

He kicked well off both feet and from hand, as demonstrated by his perfectly weighted kicks for Ashley Evans to score a try in both the semi-final and final. Visit the IRB Junior World Championship 2013 Media Centre for rights-free photographs and audio at www.irb.com/jwc

2006 – IRB International Under 19 Player of the Year: Josh Holmes (Australia)

2006 – IRB International Under 21 Player of the Year: Lionel Beauxis (France)

2005 – IRB International Under 21 Player of the Year: Tatafua Polota-Nau (Australia)

2004 – IRB International Under 21 Player of the Year in association with Waterford Crystal: Jerome Kaino (New Zealand)

2003 – IRB Under 21 Player of the Year in association with Waterford Crystal: Ben Atiga (New Zealand)

2002 – IRB Under 21 Player of the Year in association with Waterford: Pat Barnard (South Africa)