This was the second win for the Welwitschias following their 55-6 victory over the Cranes of Uganda at the same venue a week ago. The match was one sided with the visitor failing to threaten the well-organized Namibian team. 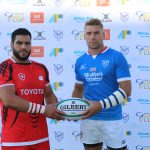 Namibia meant business from the start scoring their first try in the second minute through Lesly Klim, which was converted by fly half Cliven Loubser. Captain Johan Deysel added another converted try to make in 12-0 within 10minutes.

Klim then added another and Loubser made no mistake with the boot to put the host 21-0 up with only 14 minutes on the clock.

Tunisia was offered a chance to put some points on the board through a penalty on the 19th minute, but Khalifa Nesemeddine missed.

Chrysander Botha then joined the try-scoring fun but Loubser missed.

In the second half, Namibia continued from where they left, scoring 10 more tries through Greyling who scored three, Botha who added a double, Klim who contributed two, substitute’s Peter-Jan Van Lill, Damien Stevens and Johan Tromp each contributing a try apiece.

The home side missed only two conversions out of the 18 tries they scored against an out of sorts Tunisian team who offered no threat going forward and little to no resistance in defense.

The Welwitschias who have won the Rugby Africa Gold Cup for four times in a row will be looking to qualify for the 2019 World Cup finals slated for Japan.

Speaking to the media after the match Namibia’s Coach Phil Davies said he was pleased with the ambitions of his side.

“They played well in the second half with the flowing passing game. I am still in the process of building a competitive team as most of these layers are still very young,” he explained.

Captain Deysel said they had missed a few passes in the first half and they rectified that in the second half.

Losing captain Ahmed Nasri was gracious in defeat saying even though they knew Namibia was a strong opposition, they did not expected the margin of the scoreline to be this wide (Rugby World Cup African Qualifiers).

“We did not have the best match, our preparations were marred by injuries and difficult travels to Windhoek. Our first team players are also absent as they have contracts with overseas teams,” he said.

Abdelaziz Bougja, chairman of World Rugby’s African association, Rugby Africa (www.RugbyAfrique.com), said: “Congratulations on the Namibian team for their second convincing home win. I also wish to commend the Tunisian team for their valiant effort and wish both teams the best for their remaining matches”

“It seems that Namibia is very much in the driving seat to qualify to their sixth consecutive Rugby World Cup. The match between Namibia and Morocco on June 30 will be very interesting!”.