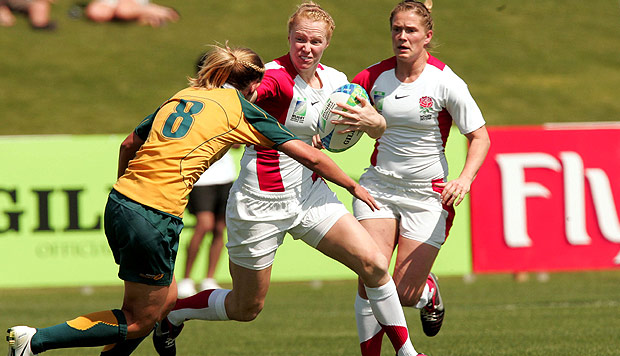 Taking the Game to 10 cities across the country enables tournament organiser England Rugby 2015 to showcase the Game to a large audience across the length and breadth of the country. The match schedule will see 25 matches played in dedicated Rugby venues, seven in multi-event stadia and 16 in football venues. This blend of stadia will provide a variety of Rugby World Cup match day experiences and more than two million opportunities for fans to engage with one of the world’s most recognisable major sports events.

The tournament will open at Twickenham Stadium on Friday, September 18, 2015, where England will face Oceania 1, confirmed at the close of the qualification process in 2014. In addition to a selection of pool matches, Twickenham Stadium will also host two quarter-finals, the semi-finals and the Final on October 31. Two quarter-finals will also be played in Cardiff at the Millennium Stadium and the Bronze Final will be hosted at the Olympic Stadium.

Confirmation of the match venues and match schedule follows approval from the Rugby World Cup Limited (RWCL) Board and an extensive and thorough evaluation process, undertaken by England Rugby 2015 in collaboration with tournament owners RWCL, Host Broadcaster ITV and commercial stakeholders.

The 13 match venues selected from the long list of 17 named in October 2012, plus Sandy Park added last month and the Manchester City Stadium which replaces Old Trafford, took into account geographical spread, sporting and facilities criteria, support from host cities, and capacity requirements to deliver the best possible platform for a fully engaging world-class tournament for fans and teams.

England Rugby 2015 also launched the vision for Rugby World Cup 2015 today outlining the tournament as a celebration of Rugby and its unique values, exciting and inspiring our nation and the world to play and support the Game.

England Rugby 2015 Chief Executive Debbie Jevans said: “The world can now start planning for Rugby World Cup 2015. Today, we’ve brought the tournament to life, announcing the match venues and the full match schedule. In less than two and a half years’ time, we will be welcoming the world to England and to a celebration of Rugby, played in a range of atmospheric stadiums right across the country.”

“Rugby has so much to offer – and over the next two and a half years, we will be working hard with RWCL to deliver a tournament which celebrates the unique values of Rugby and excites and inspires the nation and the world to play and support the Game. The countdown to 2015 begins in earnest today and we look forward to welcoming the world to England in 2015.”

“We are very grateful to all the cities and venues who have been part of the selection process for Rugby World Cup 2015. The support and interest shown by Coventry, Bristol, Derby, Southampton and Sunderland has been excellent and, whilst they have not been selected to host, we will continue to build upon the relationships forged throughout this process to ensure that these cities will still play a part in this truly nationwide tournament.”

RWCL Chairman Bernard Lapasset said: “The delivery of the match schedule and match venues in collaboration with England Rugby 2015 is an important milestone for what promises to be a truly spectacular Rugby World Cup. Through this rigorous process we have been able to develop solid foundations for the best tournament experience for all participating teams, the host nation and the global Rugby community.”

“We have also worked hard with all stakeholders to deliver a match schedule that is fair and balanced for all teams and that will provide the stage for the world’s finest players from 20 nations to perform to the best of their ability during a six-week festival of world class Rugby.”

“Rugby World Cup 2015 is about opportunity. It is the promise of more than two million opportunities to engage with one of the world’s biggest major sports events. It is the opportunity to engage new fans the length and breadth of the country and to grow Rugby around the world in order that more men, women and children may experience the sport and its character-building values. It is set to be an exceptional event for the teams, the fans, the host nation, and the continued development of Rugby worldwide.”

Minister for Sport and Tourism Hugh Robertson said: “Rugby World Cup in 2015 is another great global sports event coming to the UK. It has the full backing of Government and will be fantastic for Rugby in this country, encouraging more people to get involved. There is also a great tourism opportunity to make the most of with matches being played across the country.”