Home  »  OTHER SPORTS   »   Rugby joins sporting family in getting active 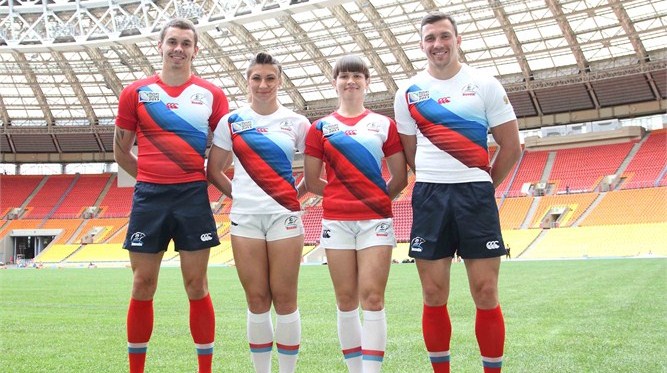 Dublin – Ireland, June 23, 2013: Russia men’s and women’s players promote Olympic Day in the Luzhniki Stadium, venue for the 1980 Olympics and for RWC Sevens 2013. Rugby has joined the global sporting family in celebrating Olympic Day and encouraging men, women and children to get up, get out and get active.

Rugby World Cup Sevens 2013 is about to take the Russian capital Moscow and the world by storm, showcasing the latest Olympic sport to an unprecedented Sevens audience.

And as the sporting family encourages the world to ‘get active’, Rugby continues to experience strong growth with 5.5 million men, women and children getting active across 117 national Member Unions affiliated to the IRB.

In addition, more and more Unions are actively collaborating with their National Olympic Committees to support the development of Rugby, team preparation and coaching structures.

Earlier this year the IRB launched its Get Into Rugby mass participation programme, which is aimed at introducing one million new players to Rugby before the Rio 2016 Olympic Games.

Alongside programmes in Colombia and Brazil, Get Into Rugby courses have also proven a hit in China as Sevens prepares for its Youth Olympic Games debut at Nanjing 2014.

And with Olympic Games anticipation high, the 24 men’s and 16 women’s participating national teams in Moscow have been spreading the word on social, digital and traditional media.

Jen Kish, Canada women’s sevens captain: “It’s [the Olympics] is mind blowing stuff and has always been a dream of mine to compete on the biggest stage in the world with my friends #Rio2016.”

Colin Gregor, Scotland men’s sevens captain: “Olympic Day will be spent rising at 4am to go to the airport and off to Moscow for #RWC7s. Exciting week ahead.”

Jesse Parahi, Australia men’s sevens player: “Training [on Olympic Day]. The Olympics is the pinnacle of sport and it would be amazing to be part of it. Pumped for #RWC7s.”

British and Irish Lions Official Twitter feed: “It’s #olympicday and @lionsofficial are getting active and urging all to do the same. #rugbybuildingcharacter”

IRB Chairman Bernard Lapasset added: “Sport is about bringing people together, having fun and getting active. Sport has the power to drive social change through its strong values and today we join our sporting friends from around the world in celebration of sport.”

“Rugby is bound together by its character-building values, which is a natural fit with the ethos of Olympism and we are delighted that more people are getting active as Rugby in all its forms reaches out to new participants, audiences and commercial partners every year.”

With the Olympic effect being felt across the whole sport and participation having been boosted by inclusion, it is not just the Sevens players who have been joining in to celebrate Olympic Day. Players in the IRB Junior World Championship 2013 in France have also been expressing their support on the final day of the Fifteens tournament.

Rugby World Cup Sevens 2013 from June 28-30 will be the first major international Rugby event in Russia and the last world championship before Rugby Sevens debuts at the Rio 2016 Olympic Games.