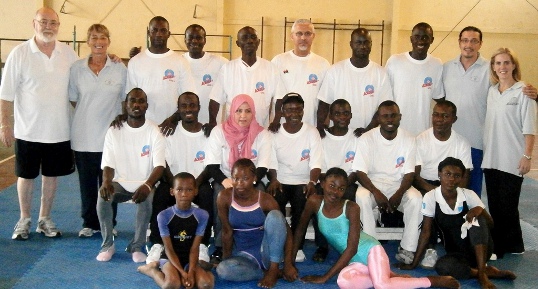 This Academy was attended by fifteen coaches from three different federations: Libya, Cameroon and Congo. Cameroon is the 112th country to attend an FIG Academy and the 53rd to attend an Aerobic Gymnastics Academy.

The course leader was John Atkinson, the past-President of the Aerobic Gymnastics Technical Committee and was assisted by Eunice Lebre of Portugal who is a member of FIG’s Scientific Commission and has served as an expert at many Academies. At this Academy she taught most of the theory lectures. There were two additional Aerobic Gymnastics specialists: Brevet coach Tamaryn Johnson of South Africa and French national coach, Christophe Devillaine who was a multiple World Gold medallist as a gymnast and coached the French team at four World Championships.

The Academy was held at the High Level Institute for Physical Education & Sport in Brazzaville. The conditions were rather minimal for the practical sessions and made this perhaps the most challenging and Spartan of all Academies. However, the participants were enthusiastic and the FIG experts extended themselves to make the Academy a success.

The beginning level of most of the coaches was reflected in the wide range of results, but the participants achieved an acceptable average of 65%. The highest result of 86% over the three part examination (two practical and one theoretical exam) was achieved by Almé Simplice Ambeto of Congo. Tied for second place were Albert Mouanga and Amel Ulrich Koulombo both also from Congo.

Special thanks must go to François Bakana, the president of the Congo Gymnastics Federation and his staff for hosting this Academy and doing all possible to make it a success.

The FIG Academy Program has now reached a major milestone. Over 2,000 different coaches have attended and, counting those that have attended Academies more than once, we have reached just six under 3,700 Academy participations.

The programme will have no courses during October. But several other events are scheduled as the FIG Men’s and Women’s Artistic Gymnastics Age Group Programme becomes implemented and monitored in twenty-eight member federations over the coming six months.