Home  »  OTHER SPORTS   »   Queen Kintner on the hunt for Crankworx doubleheader

Whistler, BC, May 31, 2017: Reigning Queen Kintner of Crankworx, American Jill Kintner, is heading into June with an all-defining mission: fend off Australian Olympian Caroline Buchanan. 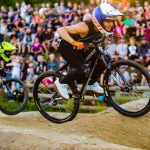 After racing her entire 2016 season with a substantial lead, just 25 points now separate Kintner and Buchanan in the race to secure the Crown and be known as the best all-round mountain bike athlete on the planet.

Never one to shy away from a challenge, Queen Kintner may be under pressure, but her mindset appears to be stately.

“While NZ wasn’t perfect, this time, I have faith in the amount of work I put into training and my riding ability for the rest of the series,” she said in interview this week.

“It’s good to have a challenge, and it will motivate me to refine my skills, and put what I learned to use. You have to be good at several disciplines to stand at the top in Whistler, and that’s the main goal.

“I’m hoping for less rain in Les Gets, so I can charge,” she added.

“Charge” is what Kintner did for a full season in 2016 to take her Crown by a wide berth, and while 25 points hardly leaves her off form, Buchanan’s harrowing ride to Olympic fourth-place last year has clearly given her the chops of a very seasoned competitor. Though nine years Kintner’s junior, she sailed to the win in both final rounds in the Rotorua Pump Track Challenge presented by RockShox, despite having to regain composure after a clap-stick fell in her lane during the semi-finals.

Kintner is the multi-disciplinary talent of the pair. She virtually owns the Crankworx Air DH, is considered a Dual Slalom expert, and has eight pump championships to her name, including the Crankworx Pump Track World Tour Championship. Yet she was only .56 of a second up on Buchanan in the Crankworx Rotorua Air DH, and beat by Canadian Vaea Verbeeck who squeaked in by 0.09 seconds for first place.

“It is really cool to see so many women in Crankworx riding at such a high level, with more women competing in more disciplines than ever before. At the pinnacle of it all you have the legendary Jill Kintner and BMX crossover superstar Caroline Buchanan battling it out for the queen’s throne coming out of Rotorua,” says Crankworx GM Darren Kinnaird

“Both women are creating new fans as the competition grows. It’s really cool to see young girls getting engaged with the sport, and choosing their heroes to cheer for. From Queen Jill signs in Whistler to chants of ‘Car-o-line, Car-o-line’ in Rotorua, the women of Crankworx are showcasing the very best of women in sport.”

A season-long competition with a $25,000 Crown on the line, is never won or lost in one round, of course, and there are other contenders who could still go the distance.

With two downhills in Les Gets, one in Innsbruck and three remaining in Whistler, the World Cup contingent may prove a force, with riders like Verbeeck, Tracey Hannah (AUS), and Emilie Siegenthaler (SUI) all very much contenders, in third, fourth and sixth, respectively, in the standings.

Generalist Katy Curd (GBR) could climb from eighth spot and Canadian Casey Brown, with her love of downhill and enduro, is still very much on the board. Brown has already been a Queen of Crankworx, in the years before the festival became a world tour, and while the whip-off may not count toward the title, she certainly owns her own stake in Crankworx history as the undefeated champion of the Crankworx whip-off.

Crankworx heads to Les Gets, France, June 14-18, and Innsbruck, Austria, June 21-25, for its inaugural European doubleheader. It will be broadcast live, all season long, onCrankworx.com and Pinkbike.com.
All four events in the quest for the Triple Crown of Slopestyle are broadcast LIVE on all your devices exclusively on Red Bull TV. The Crankworx Les Gets Slopestyle and Crankworx Innsbruck Slopestyle presented by Kenda are the final events of each festival. Please check the listings below for broadcast times.