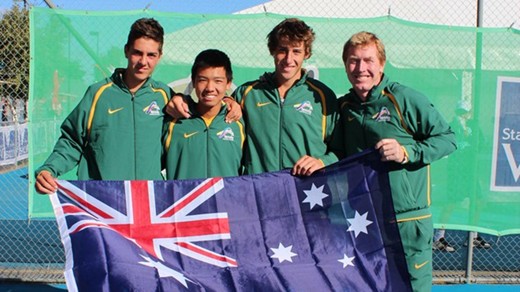 In the Junior Davis Cup final, Japan won a thrilling opening rubber over Australia. Jumpei Yamasaki (JPN) recovered from losing the first set to Li Tu (AUS) to take the second 62. In the third Tu served for the match at 5-4 but was broken and Yamasaki capitalised, holding serve and then breaking Tu to love to take the match 46 62 75.

Thanasi Kokkinakis (AUS) then completed an unbeaten run in the event beating Naoki Nakagawa 61 61 to level the tie at one rubber all. Kokkinakis then combined with Daniel Guccione to take out the doubles 63 60 for Australia to win the Asia/Oceania Junior Davis Cup qualifying competition. China beat Australia on the third day of round robin pool play and the two faced off again in the final of the Junior Fed Cup after Australia had scored an upset win over top seeds India in the quarter-finals.

Again Australia got off to a great start with Zoe Hives beating Qiu-Yu Ye 62 63. The re-match between Zi-Yue Sun and Naiktha Bains turned into a real battle. Sun won the first set 64 and Bains fought back to take the second 62. The Chinese player then went into overdrive using her big forehand to keep Bains at the back of the court as she powered away to take the match 64 26 62 to square the tie.

MERIDA, MEXICO: North/Central America & Caribbean Final Qualifying took place in Merida, Mexico with 16 teams competing across four events for the two available places within each. USA did a clean sweep across the Junior Davis and Fed Cup by BNP Paribas, as well as the World Junior Tennis Competition, coming first in all four events to secure a place at each of the Finals.