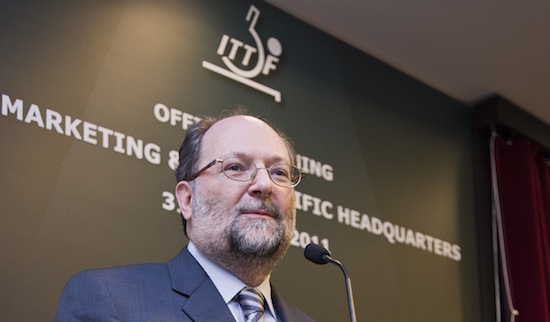 Lausanne, Feb 28, 2013: The International Table Tennis Federation (ITTF) President Adham Sharara announced that he will run for another term as President, a position that he has held for the past 14 years. Currently there are no other nominations, nominations close on 15 April 2013. Mr Sharara’s announcement came at the Executive Committee meeting of 2013 in Qatar, which was held in conjunction with the ITTF 2013 World Tour Qatar Open on 23-24 February 2013.

This Executive Committee meeting was the last meeting before the election AGM in Paris, in May 2013, so it was used to analyze all the proposals made by the member national associations and the ITTF committees.

There are fewer proposals than usual this time, indicating a period of stability. Most of the proposals are minor and basically to make small changes in ITTF’s international regulations.

“I would like to thank the Qatar Table Tennis Association for providing such level facilities and hospitality for this meeting” stated ITTF President Adham Sharara. ‘The meeting was very successful with some very high level discussion and positive decisions for the future” added Mr Sharara

The main decisions and discussions to come out of Qatar were:

• The Executive Committee accepted the formal application of 4 Continental Federations to be affiliated to the ITTF through a special affiliation system giving the continental federation more benefits and more financial and development support from the ITTF. Africa, Latin America, North America and Oceania all signed agreements with the ITTF. Asia and Europe are in the process of studying the criteria and their application may be considered in May in Paris.

• 2013 World Cadet Challenge (most important tournament for U-15 age category, where young players represent their continental teams) was allocated to Istanbul, Turkey while Barbados Table Tennis Association provisionally and conditionally was accepted to host the same event in 2014. Both decisions have to be ratified by the Board of Directors in May in Paris.

• Qualification and playing system for the 2013 World Cup tournaments was approved. Women’s World Cup will be held on 21-23 September in Kobe, Japan, while Men’s World Cup will take place in October in Verviers, Belgium. Except the reigning World Champion, one host player and one wild card all other 17 players will qualify through the continental cups based on their final position on their respective continents and based on their World Ranking positions.

• ITTF Executive Vice President Mr. Koji Kimura presented a revolutionary way to detect “boosters” in rackets without having to remove the racket coverings. “Boosters” are types of oils that some players use by coating the sponge in the racket covering, which expands and provides more speed and more spin for the user. The new method would be ‘Non-invasive” and measures the rebound of a ball off the racket. If the rebound is beyond the normal standards for “non-boosted” rackets then it would mean that the racket has been manipulated and boosters introduced and the player would be disqualified. “Further tests will be conducted and we hope to introduce this method in the near future” said ITTF President Adham Sharara.

• The Executive Committee received and discussed the evaluation reports of the two candidates for hosting the 2016 World Championships. Bids have been received from Malaysia (Kuala Lumpur) and Sweden (Halmstad).