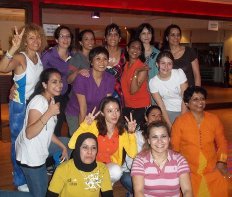 LAUSANNE (SUI), July 4, 2012: WAG judges, On 21-26 June in Amman (JOR), the Jordan Gymnastics Federation, with the support of the Asian Gymnastics Union (AGU), played host to the AGU’s annual Women’s Artistic Gymnastics (WAG) Judges Course, as part of the AGU Development Programme for 2012. The course was overseen by Mrs. Rima (Radiye) Zinal Kizilgun, President of the AGU’s WAG Technical Committee. 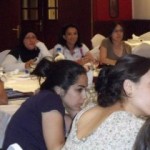 The participants in the 2012 course were as follows:

The course had two main objectives: to undertake a full revision of the 2012 Code of Points as applied in the current cycle; and to go through the provisional Code of Points for 2013, which is due to be finalised after the upcoming Olympic Games in London.

Another purpose of the course was to improve technical and practical skills, and increase the collaboration between the judges throughout Asia.

The intensive four-day course was divided into two daily sessions: three hours in the morning and four hours in the afternoon.

The topics covered included: all competition rules and regulations for gymnasts, coaches, technical committee members and judges; an evaluation of technical requirements and difficulty levels for competition exercises; a full study of the General Table of Faults and Penalties; and a full analysis of the four pieces of WAG apparatus (vaulting table, uneven bars, balance beam and floor), including instructions, composition requirements, difficulty values and penalties for each piece of apparatus.

All sessions were backed up by practical video-based analysis from various international competitions and events, with many examples provided for each course item, to maximise the benefits of the course and facilitate understanding by all of the judges present, regardless of their level.

All of the participants were enthusiastic and eager to make the most of the opportunity to engage in what was a high-level forum for discussion and learning. Participants also enjoyed a day trip to the ancient city of Petra, organised by the host federation.

After the final session, participants attended a farewell dinner and were presented with certificates issued by the AGU.

Speaking on behalf of the AGU, the organisation’s President, Mr. A-Rahman Al-Shathri, expressed his thanks to the Jordan Gymnastics Federation and its staff for their hospitality and efficiency in hosting such a high-quality event. He also expressed his thanks to Her Royal Highness Princess Rahma Bin El-Hassan and Mrs. Nuha Hattar, the President and General Secretary of the Jordan Gymnastics Federation for their efforts in facilitating the course and attending the opening and closing ceremonies. ___ FIG