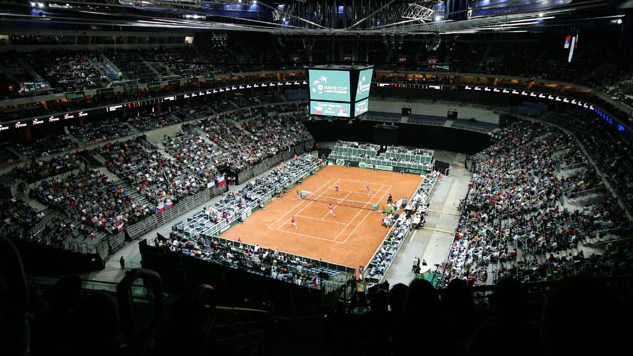 London, May 28, 2012: The ITF has announced the Fed Cup by BNP Paribas Final between Czech Republic and Serbia on 3-4 November will be played on an indoor hard court at The O2 Arena in Prague, Czech Republic. This will be the first ever Fed Cup tie to be played at The O2 Arena, although the multi-purpose venue has hosted Davis Cup ties in 2007 and 2012, the latter being this year’s World Group quarterfinal between the same two nations. The O2 Arena will boast a capacity of nearly 11,000 seats for the Fed Cup Final with ticket details being announced in due course.

Defending champions Czech Republic are through to the Fed Cup Final for the second straight year after a 4-1 home victory over Italy, while Serbia reached this stage of the competition for the first time in their history with a 3-2 away win against Russia. This will be the first Fed Cup meeting between Czech Republic and Serbia as independent nations.

The O2 Arena, formerly known as the Sazka Arena, was built in time to stage the World Ice Hockey Championships in 2004 and has since held major sporting events for ice hockey, basketball and floorball. The venue has also welcomed some of the world’s biggest music acts spanning many eras. The likes of Elton John, Bob Dylan, Tina Turner, Sting, Madonna, Kylie Minogue, Coldplay, Rihanna, Black Eyed Peas and Lady Gaga have all performed at The O2 Arena.

Fed Cup by BNP Paribas is the largest annual international team competition in women’s sport, with 90 nations entered in 2012. The event was established in 1963 to celebrate the 50th anniversary of the founding of the ITF. The title sponsor is BNP Paribas, the Official Bank of Fed Cup. Adecco (Official HR Sponsor) and BoscoSport (Official Clothing Sponsor) are international sponsors, and Wilson Sporting Goods (Official Ball) is an international partner.