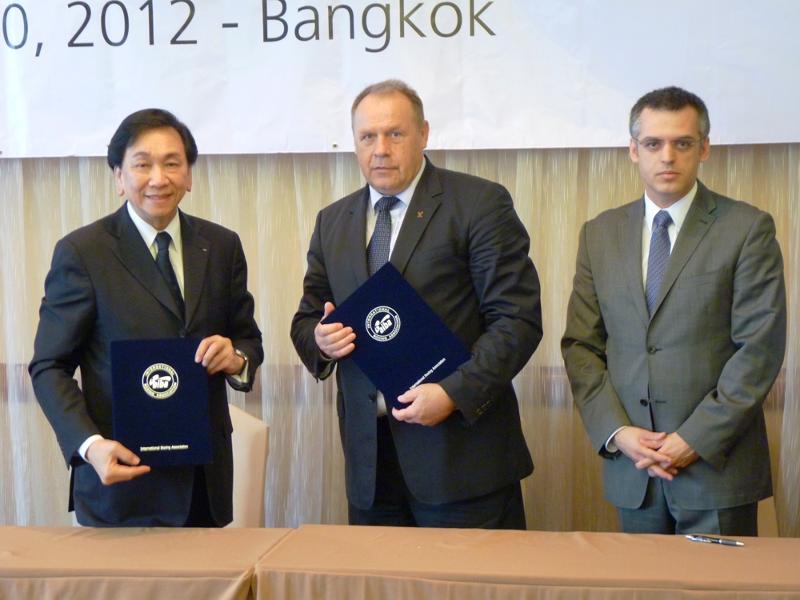 Bangkok, Thailand, July 08, 2012: Franchise, The World Series of Boxing is very pleased to welcome a new addition in its line-up for 2012-2013 season after an agreement was signed on Sunday 8 July 2012 with the Polish Boxing Association and Stand4Them Promotions sp. z o.o.

“Following on from the recent addition of Argentina and Ukraine, we are delighted to welcome Poland as a new Franchise in the World Series of Boxing”, stated Dr Ching-Kuo Wu, AIBA President and WSB Board Chairman. “These new signings, coming just a few weeks after season 2 ended in a packed ExCeL London, prove the attractiveness of our competition. We are convinced that the next season will bring WSB to a whole new level.”

“I want to take this opportunity to thank AIBA and its President, Dr Ching-Kuo Wu, for the opportunity that you are offering us. Joining the WSB will give a great boost to boxing in Poland. We are proud to be part of the AIBA Family”, declared President Rybicki, Light Middleweight Olympic Champion in 1976.

The Franchise will be owned and run by the local promotion company Stand4Them Promotions. Its Managing Director, Mr Kolkowski, will act as General Manager of the Polish WSB Franchise. “We are very happy and honoured to join the WSB and demonstrate our commitment to develop the sport of boxing, especially in Poland. Hopefully we will prove that Poland is a country that counts in the boxing family”, he stated.

This Memorandum of Understanding is also significant with regard to the involvement of the Polish Boxing Association in the development of the AIBA Professional Boxing programme (APB). —– AIBA