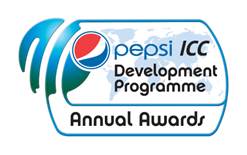 The awards, which have been running since 2002, form part of the ICC’s commitment to promoting excellence in cricket development outside the ICC’s Full Members. The awards are designed to recognise exceptional performance and service to the game in ICC Associate and Affiliate Member countries, highlighting cricket’s expanding reach and sharing best practice.

ICC Global Development Manager Tim Anderson said: “The Pepsi ICC Development Programme, together with ICC’s Associate and Affiliate Members, is dedicated to the significant growth of our Great Sport around the world. Considerable progress has been made in this regard in recent years, and these awards provide an opportunity to recognise the outstanding programmes, initiatives and people that are contributing to this expansion.

“The Award categories reflect the important Development aspects of the ICC Strategic Plan that strives for cricket to be A Bigger, Better, Global Game by 2015. Noting the substantial activity currently taking place in Associate and Affiliate Members in-line with this vision, I encourage all Members to submit their nominations for the 2012 Awards.”

There are a total of eight awards across a range of country and individual categories. Nominations are initially considered on a regional basis with the various regional winners then progressing to the global stage. Further details and application forms are available on www.pepsiiccdevelopmentawards.com

Nominations need to be submitted to ICC regional offices by 20 December 2012. Regions will select and announce the respective regional winners by 25 January 2013 with these then also put forward for the global judging process that will take place during February. The global winners will be announced on 28 February 2013.

All global winners in the following categories will receive a US$2,000 cricket equipment grant to their national cricket body:

• Photo of the Year

• Volunteer of the Year

The panel to decide the global winners includes the current ICC President, Alan Isaac, and previous ICC Presidents Malcolm Gray, Ehsan Mani, David Morgan and Sharad Pawar, as well as a representative of the MCC, whose name will be announced in due course. —- ICC