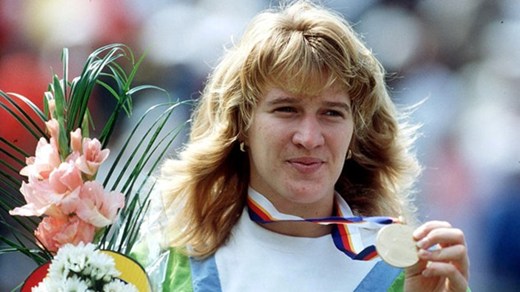 By Mark Hodgkinson: Steffi Graf may have stayed in the Athletes Village when she played at the Olympics, but she left as soon as “the partying started”slam.

“When it got too loud, with people partying after they had finished competing, that’s when I went to a hotel,” Graf said of her experiences at the 1988 Games in Seoul.

Graf was there to win, and that she did, with her gold medal sealing a defining moment in her career by completing the Golden Slam – all four majors and the Olympic title in the same year.

Graf plainly delighted in the experience of being an Olympian, but it was still surprising to hear the German saying that she valued her Olympic gold above any of the Grand Slam titles – 22 in all – that she won over the course of her extraordinary career.

“Winning the Olympic gold medal is a different experience to winning a Grand Slam, and I have to say that I rate it higher, I really do,” Graf said in an interview. “The feeling of playing for your country, the camaraderie, all the different sports – it just feels more special.

“I have so many different memories from 1988 and could go through all the matches at the Grand Slams, but arriving in Seoul, and being part of that Olympic feeling, and being in the Village, and being with the other athletes, that was very special. Those are probably my strongest memories.”

Graf was often her worst critic; and the Golden Slam didn’t stop her from putting more pressure on herself.

“At the time, I wasn’t so aware of what was happening. I played so well, but I have to say that when I got to the Olympics I was emotionally a little tired as maybe there was some pressure at the time.

“It definitely didn’t relieve any, because I’m my worst critic, in a way. When I did well, I always wanted to push myself to do better, and that didn’t change after that,” said Graf, an ambassador for Longines.

This summer, Graf will doubtless be watching with interest when the Olympic Tennis Event is played at the All England Lawn Tennis Club.

“I would have loved that opportunity to play in the Olympics at Wimbledon. But I’m not complaining. I’m very happy with how everything turned out. I wouldn’t change a thing. But what a great facility to be playing at in the Olympics. It doesn’t get much better than that.” ____ ITF. Photo: Tommy Hindley