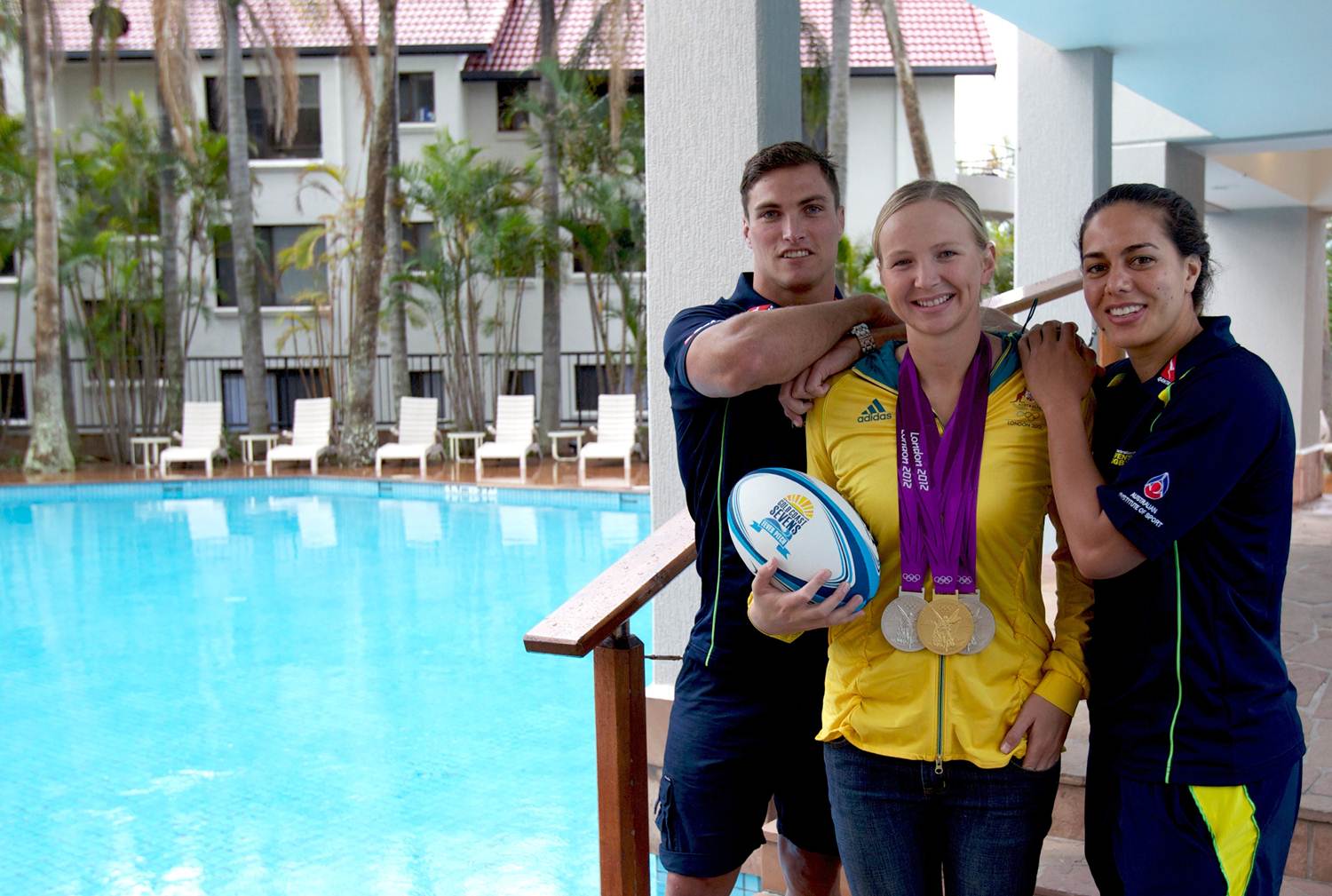 Dublin – Ireland, Oct 12, 2012: Australia men’s and women’s Rugby Sevens captains, Ed Jenkins and Rebecca Tavo, were offered a tantalising glimpse into the life of an Olympian when they met up with three-time Olympic medallist, swimmer Melanie Schlanger, ahead of the Gold Coast Sevens.

“Every time I look at these medals it brings back all the memories, so it’s something that I’m going to cherish for a long time,” said Schlanger.

“It’s really exciting that the Sevens is going to be in the next Olympics and they get a chance to chase that dream, and it is a big dream. I really hope that they can experience it,” added Schlanger, who was excited to welcome Rugby Sevens athletes into the Australian Olympic family.

“Any time you get to associate yourself with another Olympic sport is exciting and the Rugby Sevens is such an action-packed game that it’s going to be really great to be a part of the Olympics, to bring that fun atmosphere to the Games and intermingle that with the other sports as well. It’s going to be great.

“Receiving an Olympic medal is something you can’t fully describe in words, just that feeling is overwhelming and to sing your national anthem on top of an Olympic dais is the pinnacle of sport, in my opinion,” added Schlanger.

Having helped Australia to victory at the first Rugby World Cup Sevens for women in 2009, Rebecca Tavo is a reigning World Champion. She will soon embark on the first IRB Women’s Sevens World Series, which she hopes can act as a key stepping stone on the Road to Rio.

“Just standing here next to Melanie is awesome, I hope to be like her one day and achieve what she has achieved,” said Tavo.

“It’s definitely a dream and a lot of hard work is going to have to go in between now and Rio because we have such a new and young team. We’re going to have to get some good experience and game time in the young girls’ legs.”

Jenkins claimed a silver medal at the 2010 Commonwealth Games in Delhi, and is dreaming of going one better in four years’ time.

“It would be huge. Just having seen and touched Mel’s medals has made me a bit envious and I’ll be doing everything I can to get to Rio,” he said.

Schlanger, meanwhile, was looking forward to attending her first Rugby Sevens event, the Gold Coast Sevens on 13-14 October, which is round one of the new HSBC Sevens World Series.

“I’m really excited to see what it’s all about and cheer on the Aussies,” she said. —- IRB