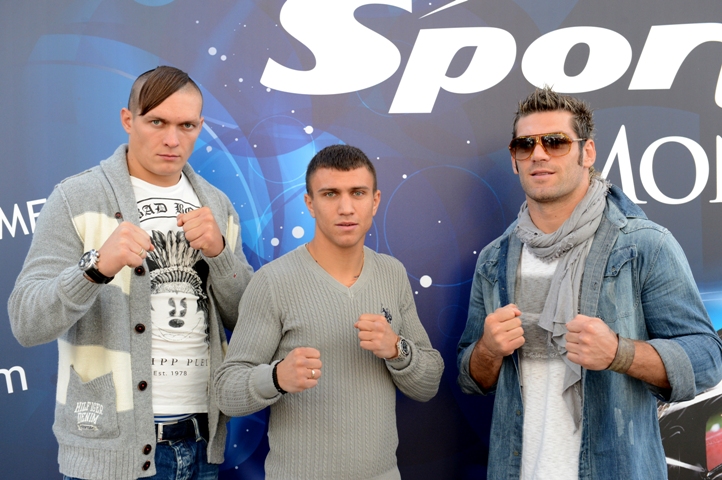 Lausanne – Switzerland, Oct 16, 2012 – World Series of Boxing (WSB) made its presence felt at the International Sports Television Convention Sportel in the Principality of Monaco on Tuesday by presenting three Olympic Champions to the world media.

The Sportel trade show is the international Sports Business Market for sports rights owners and buyers, broadcasters, marketing agencies, new media and has been recognized as the most influential business market for top-level sports and media executives for over twenty years. The perfect setting to introduce three of the world’s best boxers.

WSB was keen to promote its third season which will begin on 16-17 November 2012 and took the opportunity of holding a press conference to unveil two knock-out signings in the shape of two-time Olympic and World Champion Vasyl Lomachenko and his compatriot, also a reigning Olympic and World Champion, Oleksandr Usyk of Ukraine. 2011 WSB World Champion and 2012 WSB Team Champion Captain Clemente Russo, a silver medallist at both the Beijing and London Olympic Games, was also present to give his thoughts on seeing two colossi of the sport joining a competition that he has dominated over the last two seasons.

Widely regarded as the best pound-for-pound amateur boxer in the world, 24-year-old Lomanchenko’s signing is a real coup for the competition and he will head up a fearsome group into this season. Oleksandr Usyk claimed the Heavyweight (91kg) Olympic title in London and has been the dominant force in that category for the last two years, hugely charismatic, technically gifted and deceptively fast, he has all the attributes to become a household name.

Lomachenko declared, “I had lots of offers from the professional ranks. However I wished to continue my adventure with the Ukrainian team and what better place to do so than in the WSB, we have a great group and we can achieve great things. I am proud to be one of the leaders and I will give my all in this exciting competition”.

When asked about his ‘Hopak’ style celebration at the London 2012 Olympic Games, Usyk replied, “It was not something rehearsed, it just felt right, it was natural for me to want to express my joy by sharing a Ukrainian tradition with the world”. On the WSB, he added, “it’s where every boxer wants to be right now”.

With the injection of so much quality into an already tough competition, Clemente Russo rejoiced, stating, “It is going to be a very interesting season for everyone, especially for the fans, the WSB has never seen a line-up this strong. I am really impressed by these new recruits, especially in the Heavyweight category with Usyk, of course, but also with Filip Hrgovic and Ivan Dychko, it gives me great motivation. This season will be the hardest I have ever faced but I am confident in myself, it will be great to see who the best in the ring is”.

Upon the presentation of Lomachenko and Usyk to the world media, General Manager Dmitriy Gaistruk revealed the name of their team to be Ukraine Otamans before stating, “I am honoured with this most important position with this hugely talented squad that boasts some of the most talented boxers in the world. There is already huge pressure on us to perform but I know that fighting for the Ukrainian people will bring out the best from the group”.

Claudio Ballor, WSB Team Champion General Manager, was drawn into the banter with the Ukrainian team and beamed, “Can we repeat the success of last season? I don’t think we can, I know we will”.

The very successful press conference was brought to a close with a few words from Mr Ivan Khodabaksh, WSB Chief Executive Officer, who stated, “It is great to capture these sensational Olympic Champions, proving that the fledgling WSB really is the place to be when it comes to quality of boxing. I am also very pleased to announce that there will be many more Olympic stars joining our ranks in the next few weeks, this season will be huge”. —- WSB