Home  »  OTHER SPORTS   »   Olympic Champion Usyk to lineup for Ukraine 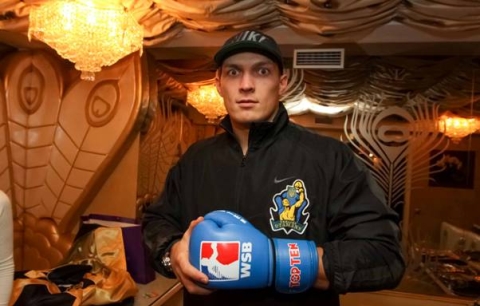 Lausanne, Switzerland, Jan 08, 2013: After finding themselves fifth and just outside the quarter-final qualification places in the Group B table, Ukraine Otamans are now looking to haul themselves back into contention by putting two Olympic medallist in the ring to face the visiting British Lionhearts this Friday 11 January (20:00 local time). The fans at the Acco International Exhibition Centre in the Ukrainian capital Kiev will be salivating at the prospect of seeing both Olympic bronze medallist Oleksandr Gvozdyk and one of their country’s crown jewels, Olympic and World Champion Oleksandr Usyk, in action.

22-year-old diminutive Ukrainian Ivan Ilnytskyy will be taking to the canvas first for the home team when he battles exciting British talent Sean McGoldrick in the Bantamweight (50-54kg) contest. It will be very tough for Ilnytskyy, who has yet to win in his three World Series of Boxing (WSB) outings, with his orthodox opponent having a huge height and reach advantage in this one. The accomplished McGoldrick on the other hand looked made for the competition after an impressive debut victory against the experienced Braulio Avila Juarez in week one.

At Lightweight (57-61kg), the showdown between Dmytro Rudenko and the Lionhearts’ 24-year-old Samuel Maxwell will be intriguing with both keen to make their mark. Southpaw Rudenko is an aggressive fighter that really enjoys coming inside and he will relish doing just that in order to deal with the threat posed by his taller opponent. The Brit narrowly lost on his WSB debut and now has a point to prove.

Another Ukrainian southpaw, Olexandr Stretskyy, will also be making his maiden WSB appearance on the night, with the 26-year-old set to go head-to-head with flamboyant Scot Aston Brown at Middleweight (68-73kg). Stretskyy is an unknown quantity at this level but has a reputation of also getting up close and personal. Brown will need to knuckle down, box at distance and keep his focus to stand any chance against the hardened Otamans fighter.

Undefeated WSB season two star Gvozdyk will make his long-awaited return to the competition after his exploits at the Olympic Games this summer to lock horns with the Lionhearts’ experienced Swede Babacar Kamara in the Light Heavyweight (80-85kg) bout. The classy 25-year-old Ukrainian proved his pedigree last campaign, beating some of the toughest boxers in his weight category, so should have too much for his opponent on the night.

Gvozdyk told us, “The team is in great shape and we are feeling very confident for the rest of the season. I cannot wait to see us performing against the British Lionhearts. The fans will be treated to a real show, that is for sure”.

The fight of the night will by far be the last of the evening as Usyk enters the ring to face the imposing and undefeated Lionhearts Tongan Uaine Fa. These two Heavyweight (91+kg) colossi promise to put on one hell of a battle. 25-year-old southpaw Usyk will be testing himself for the very first time in the pro format of WSB and Fa will represent an extremely tough test.

The reigning Olympic and World Champion declared, “I have taken my training to a new level in preparation for this fight. The WSB will be different and new so have had to really study my opponent. It was Christmas here in the Ukraine yesterday so I have had to be careful what I eat! But I take everything with humour so I wish both my opponent and myself the best of luck for Friday”.

The Tongan, a fan favourite with the Indian team last season, stated “I feel good going into this fight. I am fit and so I am confident that I can do well. I know Usyk well, as he is the Olympic Champion at 91kgs, so he will be a very tough opponent, but I hope that my extra size will give me the edge”.

With the Otamans finding themselves one place off the foot of the table in their group, it is vital for them to get the win here. The Lionhearts have shown in their first four outings that they can mix it up with the best so this match promises to really set the pulses racing. —- WSB