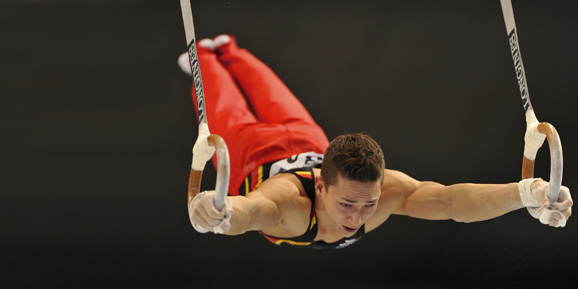 Lausanne, Nov 02: When the DTB Pokal, a FIG Artistic Gymnastics All-around World Cup, takes place in Stuttgart (GER) for the 30th time early in December, an Olympic breeze will fill the Porsche Arena.

Organisers of the Schwäbischer Turnerbund are delighted to present such a strong field to fans and are especially proud of Uchimura’s appearance.

“Uchimura rarely competes outside Asia and we are proud that he is in this time. This proves the special significance of the DTB Cup in Stuttgart,” said Belenki.

Nguyen, who trains in Stuttgart, is in great shape and looks forward to the tournament at home.

“In London, I showed that I can be at the forefront in the All-around and, of course, I would like to be at the very top for once,” the 25 year old said.

Moreover, Canada’s Victoria Moors, Great Britain’s Rebecca Tunney and Elizabeth Price of the USA are registered, with an additional, as of yet unannounced gymnast to complete the line-up.

Check out the complete roster and connect at http://www.dtbpokal.de/ for further information on the tournament. Live commentary on the competition will be available at www.dtb-liveticker.de in German and the DBT TV crew will produce 5-minutes highlight video clips of both competition days.

The All-around World Cups feature a single final round. Invitation is based on the CII rankings from the previous World Championships / Olympic Games and limited to eight gymnasts plus one wild card from the organising member federation, with a maximum of two entries per country.

World Ranking lists will be established for men and women, with the best four results per gymnast counting for the total ranking. The top scorers will be crowned the winners of the overall series at the ultimate event of the series. —- FIG